Individuals who have suffered from ovarian cancer or mesothelioma after prolonged use of talcum powder may be eligible to pursue a claim and seek financial compensation.

Talcum powder is widely used mainly by women for cosmetic and hygienic purposes. Over the years, numerous studies have shown that using talcum powder increases the risk of both ovarian cancer and mesothelioma. Johnson & Johnson, among other talcum powder manufacturers, are facing thousands of lawsuits on the grounds that the companies knew of and failed to warn users of these risks.

If you or a loved one has used talcum powder for multiple years and developed ovarian cancer or mesothelioma, contact Maxwell Law Group LLP today. We can answer your questions and review your case for free.

Important Note: On May 19, 2020, Johnson & Johnson announced that it will discontinue the sales of its popular talcum product baby powder in the US and Canada. The company claims that declining sales due to concerns about product safety was the reason behind the product discontinuation.

What is Talcum Powder?

How Does Talcum Powder Work?

For help understanding your options if you’ve been injured by talcum powder, reach out to our firm or call (844) 525-7155.

What is Talcum Powder?

Talcum powder comes from talc, a soft, naturally occurring mineral composed of the elements hydrogen, magnesium, silicon, and oxygen. Although talc is not inherently harmful, this mineral is often found in close proximity to asbestos, which is a known carcinogen.

Talc is mainly used for hygiene, and is also used to prevent diaper rash babies.

Johnson & Johnson is one of the largest and oldest manufacturers of talcum powder, marketing the product under several brand names. 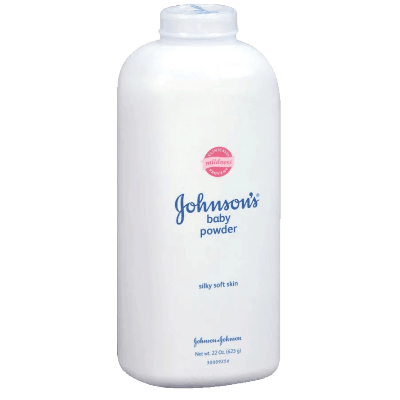 How Does Talcum Powder Work?

When ground into powder form, talc is extremely absorbent and helps reduce friction, which makes it an ideal product to prevent moisture and keep skin dry and prevent rash from forming. Johnson & Johnson discovered this benefit and released Johnson’s Baby Powder into the market back in 1893.

It has also been marketed to women for cosmetic and hygienic purposes—talcum powder has been used to thicken makeup and control odors and prevent moisture in sensitive areas. It can be found in blush, eyeshadow, foundation, face powder, and other industrial products like paint and wood putty.

The American Cancer Society discusses the concerns that arise with prolonged talcum powder use, mainly among women who apply the powder in the genital area. There have been several studies that have looked into the possibility of increased risk of lung cancer and ovarian cancer.

In its unaltered form, talc can also contain asbestos, a known-carcinogenic substance. The International Agency for Research on Cancer (IARC), a part of the World Health Organization (WHO), classified asbestos-containing talc as a carcinogen in 2011. The organization also classified genital-area use of talc body powders as a possible carcinogen.

It is believed that fine talcum powder particles can enter the vagina and travel to the ovaries, where it can stay unmoved and undetected for years. These particles trigger a response which results in inflamed ovaries, which can develop into ovarian cancer cell growth.

The FDA has not issued any warning or recall for talcum powder products, but the agency has released a statement regarding the matter. Cosmetic products do not have to undergo FDA review or approval before they are released to the market. Companies and manufacturers have a legal responsibility for the safety and labeling information of their products, but they do not need to share information with the FDA.

The FDA has also acknowledged that there has been scientific literature since the 1960s associating talc with ovarian cancer, but the FDA states that the studies have not conclusively demonstrated a link between the two.

Ovarian Cancer. The earliest study associating talcum powder with ovarian cancer was published in March 1971 in the International Journal of Obstetrics and Gynecology. The study involved obtaining tissues from patients that have ovarian or cervical cancer. It was found out that talc was identified in 75% (10 out of 13) of the ovarian tumors and 50% (12 out of 21) of cervical tumors. Many particles were found embedded in the deeper layers of the tumors.

A study review published in 2015 looked into 31 previous studies about the association of talc exposure with ovarian cancer. It revealed that talc increases the risk of ovarian cancer by 30% to 60%. The attribute risk is 29%, indicating that if talc use was eliminated, more than a quarter of women who developed ovarian cancer could have been protected from the disease. Talc use was also more specific to serous ovarian cancer association than any other types of cancer.

Mesothelioma. A 2014 study published in the International Journal of Occupational and Environmental Health showed that a specific brand of talcum powder contained asbestos, and inhalation resulted in lung problems, most notably mesothelioma.

Ovarian Cancer. In 2016, the family of a woman who died because of ovarian cancer was awarded $72 million in a verdict against Johnson & Johnson regarding talcum powder use. Jacqueline Fox had been using Johnson’s Baby Powder and Shower to Shower consistently for more than 35 and died in 2015 at the age of 62 due to ovarian cancer. The lawsuit claimed that the company knew about the risk of their talcum powder products and actively tried to hide this information from consumers. The verdict was overturned a year later due to a filing technicality. A similar verdict was also tossed in 2018 for the same reasons.

In 2017, another talcum powder victim was awarded $110 million in a trial against the pharmaceutical giant. The company claims it sympathizes with women impacted by ovarian cancer but plans to appeal the verdict.

More recently, a Missouri circuit court awarded $4.14 billion for punitive damages and an additional $550 million for compensatory damages to 22 women and their families who had suffered from the side effects of talcum powder. The company once again plans to submit an appeal. Six victims had already died from the disease, and one of the plaintiffs was too ill from chemotherapy to attend the trial.

Mesothelioma. In a mesothelioma-related lawsuit, a California-based plaintiff was awarded $18.07 million after a jury found that the manufacturing company failed to perform the proper tests needed to ensure that its talc products are asbestos-free. The plaintiff developed mesothelioma after repeated use and exposure to talcum powder from his own personal use and from exposure in his father’s barbershop.

In March 2019, a California jury ordered Johnson & Johnson to pay $29 million to a woman who allegedly developed cancer because of asbestos from the talcum powder products. The company continues to deny that its talcum-based products contain asbestos.

Currently, more than 9,000 lawsuits are still pending in state and federal courts against Johnson & Johnson and other talcum powder manufacturers on the grounds that the companies knew about talcum powder’s link to ovarian cancer and mesothelioma.

If you or your loved one suffered from ovarian cancer or mesothelioma after prolonged use of talcum powder, Maxwell Law Group can help get you the compensation you deserve. Call (844) 525-7155 or fill out the form below and we’ll investigate your case at no cost to you.