Patients who experienced complications like vein and tissue perforation, device dislodgement, and fracture and detachment of the device components from IVC filters may be eligible to pursue a claim and seek financial compensation.

IVC filters are meant to prevent blood clot formation from traveling to vital organs and causing blockage of blood supply. They capture the blood clots and allow them to dissolve within the body. Unfortunately, many patients who had them implanted suffered from injuries and potentially fatal complications. As a result, thousands of IVC filter lawsuits were filed against manufacturers regarding these complications.

If you or a loved one has an IVC filter implant and suffered from its complications, contact Maxwell Law Group LLP today. We can answer your questions and review your case for free.

For help understanding your options if you’ve been injured by IVC filters, reach out to our firm or call (844) 525-7155.

What is an IVC Filter?

How Does an IVC Filter Work?

What is an IVC Filter?

An inferior vena cava (IVC) filter is a medical device used to prevent blood clots that formed from the lower extremities from traveling to more vital organs, specifically the heart and lungs. Since the inferior vena cava has the responsibility of delivering deoxygenated blood from the lower half of the body to the right atrium of the heart, and ultimately to the lungs for oxygenation, blood clots that enter this system pose dangerous health issues including pulmonary embolism (blockage of the pulmonary arteries) and stroke (blockage of blood supply to the brain).

However, tens of thousands of lives are now at risk because of the long-term complications associated with these medical devices.

How Does an IVC Filter Work?

With the IVC filter in place, its metal wires are designed to capture blood clots coming from deep leg veins, preventing the clots from reaching the heart or the lungs. The clots captured by the IVC filter are eventually dissolved with the body’s natural anticoagulants, purportedly removing the risk of the above-mentioned conditions.

Implantation of the IVC filter is done via a small incision in the neck or groin, where a thin tube is inserted until it reaches the inferior vena cava.

Unfortunately, certain IVC filters pose high-risk problems. Three of the most common issues caused by IVC filters include the following:

In addition, injuries from an IVC filter can occur during the implantation or retrieval of the device. These issues include bleeding at the site of insertion, blood vessel puncture, and incorrect/faulty placement of the filter. 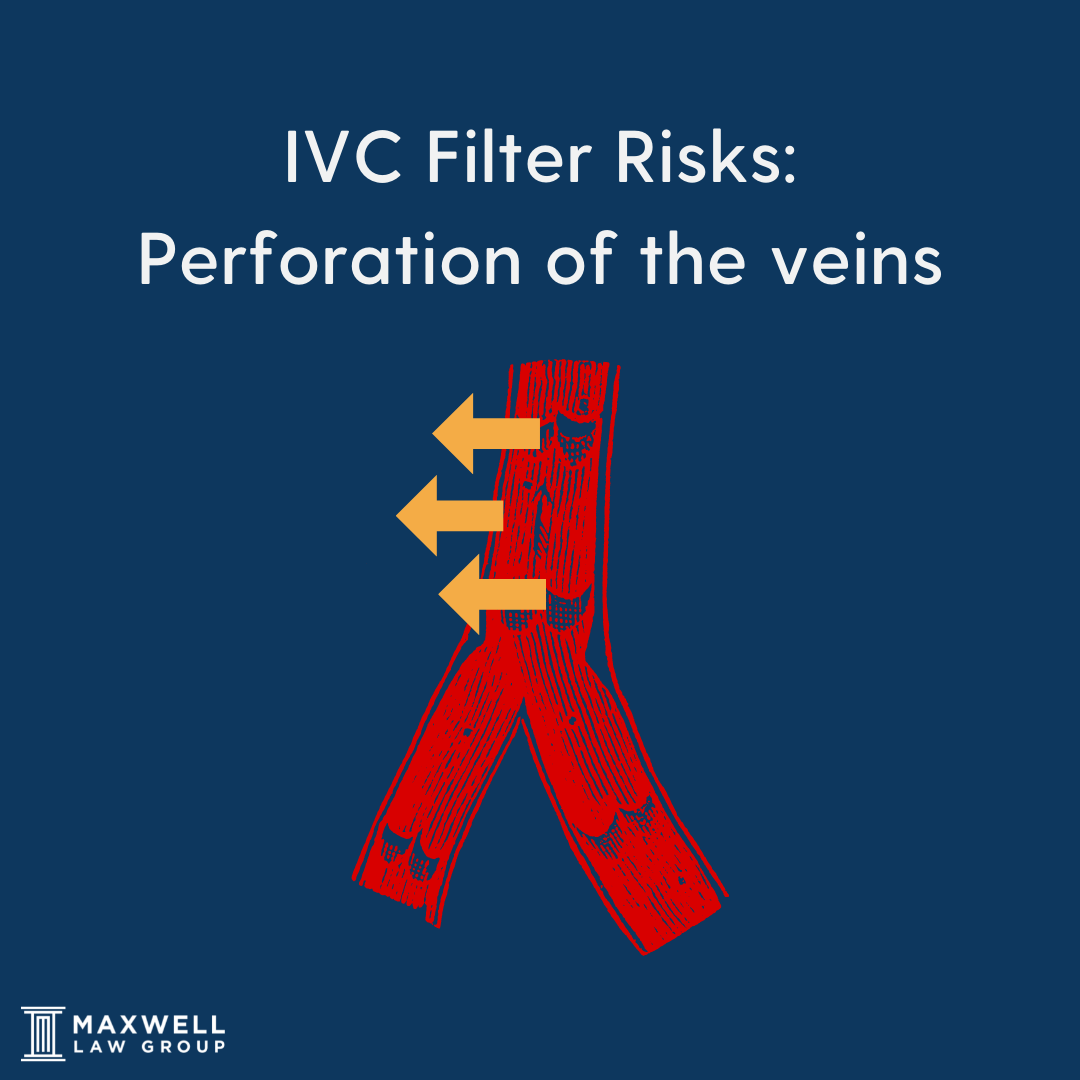 In 2010, the FDA released a safety advisory to notify medical professionals and patients of the potential risks associated with IVC filters. Between 2005 and 2010, the FDA received 921 adverse event reports involving IVC filters. These reports included 328 counts of device migration, 146 incidents of device component detachment, 70 reports of vein perforation, and 56 involved fracture of the filters.

A study in 2013 from Boston University found out that from a total of 679 retrievable filters placed, only 8.5% were successfully removed. 18.3% of the patients had an unsuccessful retrieval attempt.  During the study, there were also incidents of thrombus formation and pulmonary embolism, all while the IVC filters were in place.

In 2014, the FDA issued a safety update recommending that retrievable IVC filters should be removed 29 to 54 days after implantation (once there’s a lower risk of pulmonary embolism). Physicians and clinicians involved in the ongoing treatment of these patients are also encouraged to issue a referral for removal of the device once the risk/benefit profile of the patient leans towards removal.

In 2015, the FDA decided to issue a warning letter to C.R. Bard addressing several violations found during their inspection of the company’s IVC filter manufacturing facilities in Queensbury, New York, and Tempe, Arizona.

The findings revealed that Bard had been producing and marketing their removal systems without clearance or approval from the FDA. The warning letter also indicated that the company failed to inform the FDA of device malfunctions. In addition, the letter stated that Bard had misfiled or mishandled several customer complaints, including a report of patient death.

Multiple manufacturers are currently facing lawsuits from people who have been implanted with the following specific types of IVC filters:

If you or someone you know was implanted with an IVC filter and suffered from its complications, Maxwell Law Group can help get you the compensation you deserve. Call (844) 525-7155 or fill out the form below take the first step in protecting your rights.