Patients who have suffered from metal poisoning and other complications due to hip or knee implants may be eligible to pursue a claim and seek financial compensation.

If you or a loved one is experiencing problems related to a metal on metal hip replacement or a knee replacement, contact Maxwell Law Group LLP today. We can answer your questions and review your case for free.

Compared to other materials, metal on metal hip and knee implants are known to cause more complications because of deterioration. Patients who received the implants have experienced metal poisoning, hospitalization, and additional revision surgery. There have also been a series of major product recalls from implant manufacturers due to labeling, manufacturing, and packaging issues.

What are Hip & Knee Implants and How Do They Work?

What are Hip & Knee Implants and How Do They Work?

Hip or knee replacement is done to replace an injured or malfunctioning hip or knee joint that is causing pain, inflammation, and immobility to the patient. Artificial implants then replace the damaged areas to mimic normal motion.

Hip replacement surgery is usually done for patients with hip joint arthritis. The surgeon first removes the ball portion of the thigh bone and damaged cartilage from the surface of the hip bone. A ball -and-joint implant is then inserted and kept in place using medical glue or cement to replace the damaged portions.

Knee replacement surgery follows the same approach, with damaged bone and cartilage removed. In this case, the lower end of the thigh bone, the top surface of the leg bone, and the back surface of the kneecap are involved in the procedure. 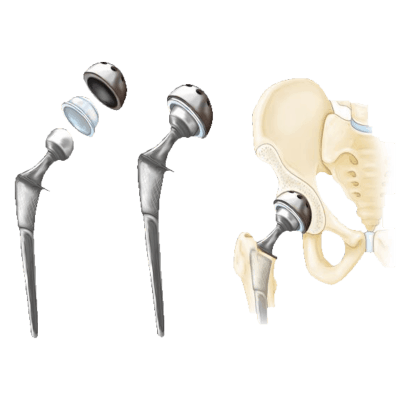 Replacement for an injured or malfunctioning hip or knee joint

Metallosis occurs when metal ions from abrasion of the metal surfaces accumulate into the blood and tissues. This results in metal poisoning, causing damage to the surrounding tissues, bones, and even the nervous system.

Metal hip implants, in particular, can result in cobalt poisoning, where excess levels of cobalt in the blood cause neurological complications, heart and lung problems, and hypothyroidism.

Other risks and complications of metal on metal implants include:

In December 2017, the FDA posted information about the concerns in using metal-on-metal hip implants. It discussed the dangers of metal ions entering the bloodstream and the symptoms of a malfunctioning device. They also cited alerts and safety communications from international regulatory agencies in the UK, Canada, and Australia regarding the medical devices, in addition to data from scientific communities.

FDA classified more than 10% of these recalls under Class 1, meaning there is probability that using these devices will cause serious adverse health events including death.

Hundreds of knee implants from some of these manufacturers were also recalled over the years due to associated complications. Zimmer’s NexGen Knee Replacement Systems faced a Class 2 recall from FDA in 2010 due to potential fracturing of the device’s components, affecting over 68,000 devices already implanted.

In 2015, the company then voluntarily recalled a component of its knee replacement system, Persona Trabecular Metal Tibial Plate, due to complaints of loose plate fit.

A study published in 2017 by the BMC Psychiatry found out that neurocognitive and depressive deficits were present after metal on metal implant failure. It followed 10 patients who received hip implants from 2005 to and underwent revision surgery from 2008 to 2012. Prior to revision surgery, 9 patients had toxic blood levels of chromium and cobalt, with significantly depressed moods comparable with moderately severe depression. Meanwhile, 7 patients exhibited neurocognitive and experienced short-term memory deficit, disorientation, and concentration issues.

Moreover, another study in 2012 identified the reason for failures of metal on metal hip replacement. The study established that 78% of revisions for the 80 patients involved occurred within 2 years of operation, which went up to 92.5% in just 3 years. Metal on metal implants primarily marketed for their durability, but this study shows that the supposed benefits of durability may not be realistic.

Hip Implant Lawsuits. To date, metal on metal hip implant manufacturers are facing over 14,000 lawsuits from patients and families that suffered from its complications and adverse effects, primarily premature failure, and additional revision surgery.

In 2016, DePuy was ordered to pay over $1 billion to 6 plaintiffs for the Pinnacle hip implants (the amount was later reduced to $543 million). Pending lawsuits against the company were consolidated to a multidistrict litigation in the US District Court Northern District of Texas.

Meanwhile, lawsuits against Smith & Nephew and Stryker were consolidated in 2017 in Maryland and Massachusetts, respectively, with bellwether trials for scheduled in 2019.

Knee Implant Lawsuits. Zimmer announced a confidential settlement resolving pending lawsuits in federal and state courts in February 2018. Hundreds of lawsuits are still being filed against other manufacturers like DePuy, Braun, and Stryker for their knee replacement systems.

If you or your loved one suffered from metal poisoning or underwent revision surgery due to premature failure of a hip or knee implant, Maxwell Law Group can help get you the compensation you deserve. Call (844) 525-7155 or fill out the form below and we’ll investigate your case at no charge to you.