Patients who have experienced chronic pain, infection, or the need for revision surgery after being implanted with hernia mesh may be eligible to pursue a claim and seek financial compensation.

Hernia mesh manufacturers are facing thousands of lawsuits due to a high number of patients experiencing complications from the hernia mesh after undergoing hernia repair surgery. While the purpose of the hernia mesh is to prevent hernia from recurring, many patients have suffered from an increased rate of recurrence and re-operation (with at least one manufacturer acknowledging this to be the case).

If you or a loved one experienced complications associated with hernia mesh after having hernia repair surgery, contact Maxwell Law Group LLP today. We can answer your questions and review your case for free.

What is a Hernia Mesh?

Am I Eligible to Participate in a Hernia Mesh Lawsuit?

How Does a Hernia Mesh Work?

Product Recall Due to Complications

This section contains news about hernia mesh lawsuits and what plaintiffs can expect going forward. This section was last updated on August 30, 2022.

August 17, 2022: The judge presiding in the Bard hernia mesh lawsuits appointed a settlement master for both parties to start negotiations and avoid going to trial.

July 14, 2022: The presiding judge for all Bard hernia mesh lawsuits denied motions from the defendant and plaintiff for a new trial, upholding the $250,000 verdict from the second bellwether trial.

June 6, 2022: The Judicial Panel on Multidistrict Litigation (JPML) has decided to consolidate all Covidien hernia mesh lawsuits into a multidistrict litigation (MDL 3029) and moved to the District of Massachussets. There are currently 73 pending federal actions in seven districts in the litigation, with 10 more in two other districts when the motion was filed.

December 14, 2021: A motion has been filed to the Judicial Panel on Multidistrict Litigation to consolidate all pending Atrium ProLite and ProLoop products. If approved, this will be the 4th pending multidistrict litigation on hernia mesh.

September 7, 2021:  The first round of the C.R. Bard Hernia Mesh bellwether trials resulted in favor of the defense.  While this result is unexpected, there are succeeding bellwether trials which will hopefully have more favorable verdicts for the plaintiffs.

What is a Hernia Mesh?

According to the FDA, the majority of hernia mesh is made from synthetic or animal tissue.

In the US, it is estimated that more than 90% of hernia repairs are aided with the use of the hernia mesh since 2000.

Support and reinforcement of tissues after hernia repair
s

Am I Eligible to Participate in a Hernia Mesh Lawsuit?

Anyone who meets the following criteria may be eligible to file a hernia mesh lawsuit:

Other important information which could determine if you are eligible to file a hernia mesh lawsuit are the following:

Anyone who meets the following criteria may be eligible to file a hernia mesh lawsuit:

Other important information which could determine if you are eligible to file a hernia mesh lawsuit are the following:

How Does a Hernia Mesh Work?

A hernia occurs when an organ or tissue bulges through a weak or open spot in the surrounding tissue or muscle. It most commonly occurs in the abdominal area, specifically in the stomach and intestines.

A hernia mesh is inserted to help reinforce the repair made and prevent from recurring. It is held in place using surgical glue, sutures, or tacks, but it can also be firmly held in place without them. 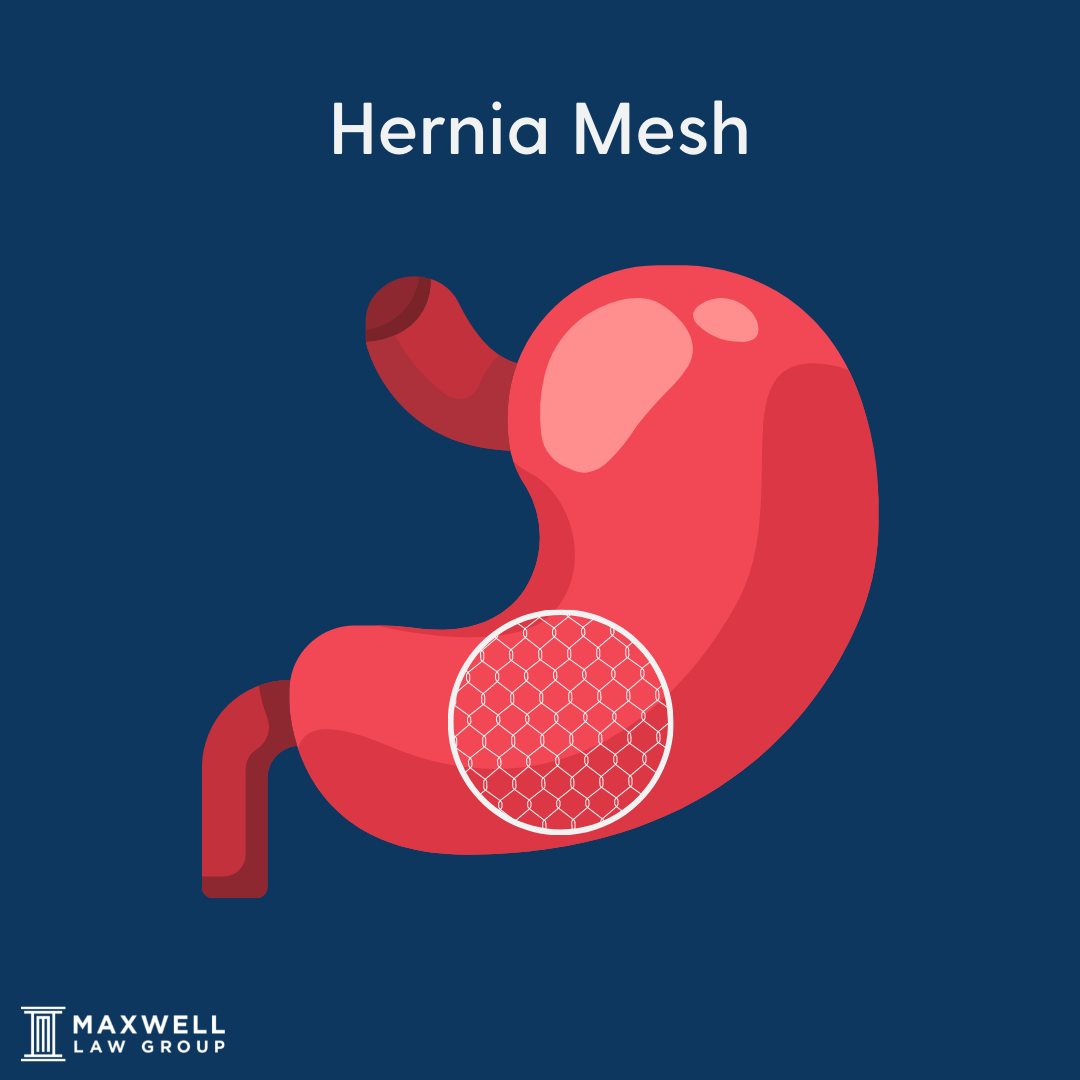 Even with a successful hernia mesh implant surgery, there are instances where the hernia mesh fails, resulting in several complications. According to the FDA, the most common side effects and injuries of hernia mesh include:

Product Recall Due to Complications

While some hernia mesh implants have proven most effective in patients, there are certain types of hernia mesh that have been linked to serious risks and complications, often leading to revision surgery for some patients. Multiple manufacturers, including C. R. Bard, Atrium Medical, and Ethicon, have issued recalls of their hernia mesh products in recent years.

In 2005, the FDA issued a recall order for the Bard Composix Kugel Mesh Patch, a ventral hernia repair device. It was discovered that the mesh had a potential memory recoil ring breakage from the pressure of placement within the abdomen. Complications included bowel perforation and chronic enteric fistula—which occurs when the device creates holes within the gastrointestinal tract. This prompted Bard to recall over 31,000 mesh units from 2005 to 2007.

Another manufacturer announced a hernia mesh product recall in 2013. Atrium Medical was ordered to recall C-QUR Edge Mesh, stemming from their lack of proper management and response regarding a rising number of complaints about the device. The FDA received reports that the implantation of the hernia mesh resulted in serious infections, causing serious medical conditions like chronic pain and severe allergic reactions.

Ethicon, a subsidiary of Johnson & Johnson, released a field safety notice initiating a product recall of Physiomesh Composite Mesh product line. The hernia mesh originally received a controversial 510(k) clearance from FDA, a type of approval that fast-tracks the application process and release of medical devices to the market, based on the company’s claims that it met all testing criteria. However, within months of its release, many reports of hernia recurrence had been reported.

The company acknowledged the unusually high rates of hernia recurrence and reoperation after laparoscopic ventral hernia repair from various and decided to voluntarily pull out the surgical device from the market. Unfortunately, the recall occurred in 2016—6 years after the product’s initial approval—after thousands of patients had already been implanted with the Physiomesh product.

C.R. Bard. On August 2, 2018 the Judicial Panel on Multidistrict Litigation consolidated all federally-filed Bard polypropylene hernia mesh cases and created MDL 2846. Many of the Bard hernia mesh products that utilize polypropylene in their design are included in this MDL.

There are also over 13,000 Bard hernia mesh lawsuits pending in federal and state courts.

On August 2021, the first bellwether trials for Bard hernia mesh lawsuits started. A month later, the verdict was awarded in favor of Bard.

On April 15, 2022, an Ohio federal jury awarded $250,000 to a plaintiff who sustained injuries because of a defective C.R. Bard hernia mesh. This is the second bellwether trial and Bard’s first loss in the hernia mesh litigation.

On July 14, 2022, the federal judge presiding all Bard hernia mesh cases denied motions from both Bard and the plaintiffs from the second bellwether trial for a new trial. This decision upholds the $250,000 verdict awarded last April, and denies Bard’s motion to overturn the verdict as with the plaintiff’s motion for a new trial on the amount of damages Bard should pay.

On August 17, 2022, the presiding judge for all federal Bard hernia mesh cases assigned a settlement master as agreed upon by both parties to resolve the litigation and avoid thousands of cases going into trial.

Atrium Medical. Atrium Medical is currently facing over 2,500 lawsuits from patients who suffered from C-QUR Edge Mesh complications. The lawsuits claim that the company failed to warn the patients about the defective surgical device. They were centralized into an multidistrict litigation (MDL) in New Hampshire District Court.

Bellwether trials were supposed to start on July 2021 but was postponed. Both parties of the litigation agreed on two bellwether trials, with potential dates to be announced soon.

Ethicon. Ethicon and its parent company Johnson & Johnson are also currently facing over 3,500 lawsuits for Physiomesh Flexible Composite Mesh, on the grounds of failure to warn and negligence on releasing a defective product to the market. Cases against Ethicon are being filed in both multicounty litigation (MCL) in New Jersey and in multidistrict litigation in the Northern District Court of Georgia.

Bellwether trials were also postponed, with speculations of a global settlement being announced in the future.

Covidien. On June 6, 2022, the Judicial Panel on Multidistrict Litigation (JPML) has decided to consolidate all Covidien hernia mesh lawsuits into a multidistrict litigation (MDL 3029) and moved to the District of Massachusetts. There are currently 73 pending federal actions in seven districts in the litigation, with 10 more in two other districts when the motion was filed.

A motion to consolidate Covidien hernia mesh lawsuits was denied last July 2020 due to a limited number of pending cases. The number of lawsuits has then increased to more than 4,000 cases.

If you or your loved one experienced chronic pain, infection, or the need for revision surgery after being implanted with hernia mesh during a hernia repair surgery, Maxwell Law Group can help get you the compensation you deserve. Call (844) 525-7155 or fill out the form below and we’ll investigate your case at no charge to you.