Zofran is an anti-nausea and vomiting medication which was approved by the FDA for use by chemotherapy patients, but became the most prescribed drug for morning sickness in pregnant women. Birth defects like cleft lip, cleft palate, kidney malformation, and heart defects were later observed in newborn babies whose mothers had taken the drug during early pregnancy. Around 500 lawsuits against manufacturer GlaxoSmithKline have been filed on the grounds that the company misled the public by marketing the off-label (unapproved) use of Zofran to pregnant women and failing to warn them about its risks.

Patients who took Zofran while pregnant and whose newborn children suffered from birth defectsmay be eligible to pursue a claim and seek financial compensation.

If you or a loved one was treated with Zofran and gave birth to a baby with birth defects, contact Maxwell Law Group LLP today. We can answer your questions and review your case for free.

How Does Zofran Work?

Zofran (generic name: ondansetron) is an anti-nausea and vomiting medication approved by the FDA in 1992 for use in patients receiving chemotherapy and radiation treatment. Doctors also prescribe it widely to treat morning sickness among pregnant women, and to prevent the baby from suffering malnutrition. This is not an approved use of Zofran, and the FDA has cautioned the public against its use during pregnancy.

GlaxoSmithKline, the original manufacturer of Zofran, was acquired by Novartis in March 2015. The drug is considered one of the most widely prescribed anti-nausea medications for pregnant women, with reported global sales of $1.5 billion in 2005. When Zofran’s patent expired in 2006, the FDA approved generic versions of ondansetron from several other manufacturers soon thereafter.

Medication for nausea and vomiting

How Does Zofran Work?

Zofran works by inhibiting serotonin receptors in the brain and gastrointestinal tract. Serotonin has been known to stimulate nerve receptors that initiate the vomiting reflex, resulting in nausea and vomiting.

Morning sickness is nausea and vomiting during the first several weeks of pregnancy due to increased hormones in the body. Despite the name, it can occur at any time of the day. It is a common event in pregnancy, occurring in more than 50% of pregnant women.

Although morning sickness by itself is not harmful to both the mother and the baby, excessive vomiting can lead to nutrient and electrolyte imbalances. Doctors often prescribe Zofran to treat morning sickness in women within the first few months of pregnancy.

Zofran has several serious risks for the users themselves, including:

The FDA released a safety communication in 2011 which was updated later in 2012 about Zofran’s effects on the heart. A clinical study initiated by the FDA showed that the drug can affect the electrical activity of the heart, specifically by prolonging the QT interval. This irregularity can cause Torsades de Pointes, a potentially fatal heart rhythm condition.

In response, GlaxoSmithKline made changes to the label of the drug regarding intravenous dosage recommendations. Within the same year, the FDA announced that the 32 mg single intravenous (IV) dose of Zofran would be discontinued due to associated risks of cardiac events.

Aside from the adverse effects on the user, several birth defects have been observed in babies whose mothers have taken Zofran during pregnancy. The birth defects include:

In 2013, the FDA cautioned the public about the off-label use of Zofran in pregnant women due to severe morning sickness. Recent studies showed an association with the early pregnancy use of the drug with congenital heart malformations, cleft lip, and cleft palate.

There are conflicting results from studies that look at the association between ondansetron and birth defects. Despite inconsistent conclusions, the risks of birth defects associated with the drug cannot be simply ruled out, especially since it can easily be transferred from the mother to the fetus via the placenta. One OB-GYN specialist states that more studies may be needed due to these conflicting results.

A study regarding the off-label use of ondansetron was conducted by researchers from Boston University. Data from two case-control studies were used: the National Birth Defects Prevention Study (1997–2011) and the Slone Birth Defects Study (1997–2014). It was revealed that off-label use of the drug increased from 1% before 2000 to 13% in 2013 to 2014. Moreover, while there was no increased risk of birth defects with ondansetron use in early pregnancy compared with non-users, it was concluded that modest associations with cleft palate and kidney malformations warranted further studies.

Another study also suggested an increased risk of specific birth defects with early pregnancy use. In 2014, data from the Swedish Medical Birth Register from 1998 to 2012 was used, where 1,349 infants whose mothers used ondansetron were identified. The study concluded that there was no overall increased birth defect risk with ondansetron use; however, a significant risk was observed for cardiac septum defects.

In 2012, GlaxoSmithKline was ordered to pay $3 billion by the US Justice Department for unlawful promotion and failure to report safety data of Zofran and other drugs. It was the largest health care fraud settlement in U.S. history.

The fraud settlement alleged that the company promoted off-label use of Zofran among pregnant women for morning sickness. It also included allegations that the manufacturer paid certain healthcare providers to promote and prescribe the drug.

In 2015, three mothers individually filed a lawsuit against GlaxoSmithKline, claiming Zofran caused congenital abnormalities and malformations to develop in their babies during pregnancy. Dozens of families from all over the country followed suit. The US District Court for the District of Massachusetts consolidated 12 Zofran lawsuits into multidistrict litigation in the U.S. District Court of Massachusetts.

To date, GlaxoSmithKline (and Novartis due to the acquisition) is facing over 500 lawsuits alleging that the company failed to warn the public about Zofran’s dangerous and that the company illegally promoted the drug as a treatment for morning sickness — even though this use was not approved by the FDA. 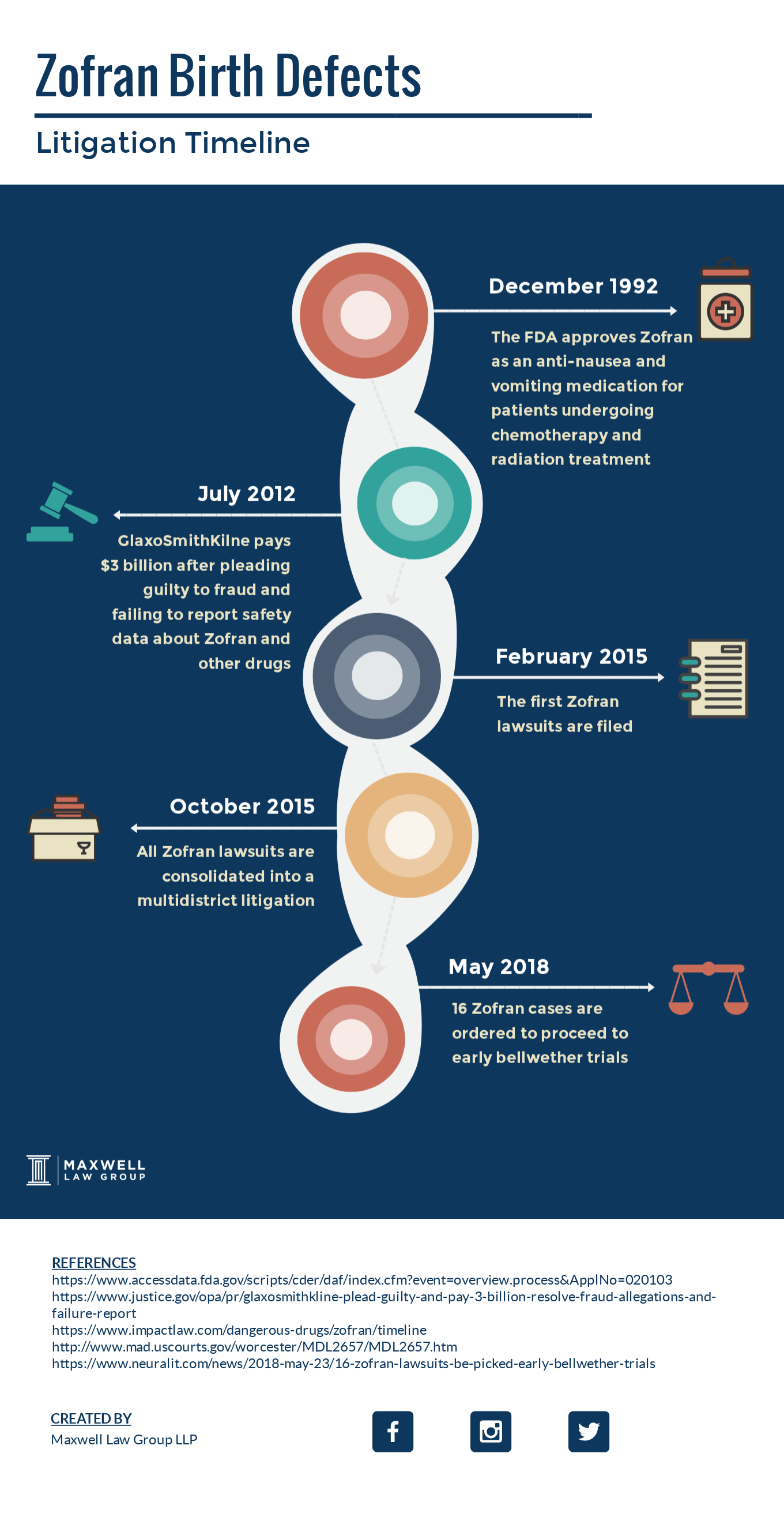 If you or your loved one was treated with Zofran during pregnancy and gave birth to a baby with birth defects, Maxwell Law Group can help get you the compensation you deserve. Call (844) 525-7155 or fill out the form below and we’ll investigate your case at no charge to you.