Patients who have experienced blood loss and other side effects while taking Xarelto may be eligible to pursue a claim and seek financial compensation.

Due to the risk of excessive blood loss when using anticoagulants and blood thinners, Vitamin K and other substances can generally be used to counteract its effects. However, with there is no currently available antidote for uncontrolled bleeding caused by Xarelto.

In Xarelto’s case, the antidote is not yet available to the public, and lawsuits claim that the manufacturers failed to properly disclose Xarelto’s risks and dangers.

If you or a loved one has taken Xarelto and suffered a severe bleeding event or have experienced other adverse effects, contact Maxwell Law Group LLP today. We can answer your questions and review your case for free.

Important Update: Bayer and Johnson & Johnson announced a $775 million settlement on March 25, 2019, for over 25,000 Xarelto lawsuits. Aside from lawsuits that are already part of the multidistrict litigation, the agreement resolves newly filed claims by those who had retained a lawyer to investigate Xarelto-related personal injury claims before March 11 if they register their claim by March 28 and file suit by April 4.

Maxwell Law Group will no longer be able to accept new Xarelto cases.

How Does Xarelto Work?

Severe Side Effects and FDA Warnings

Xarelto was marketed as a next-generation blood thinner—an effective and convenient alternative to warfarin and other traditional anticoagulants. Xarelto provided convenience in part because patients only needed to take a single pill once a day. Since its FDA approval in 2011, Xarelto has become one of the most popular anticoagulants, with over 13 million prescriptions and counting. One reason for this is that the manufacturer claimed that those taking Xarelto do not require as strict or frequent monitoring as compared to those taking other anticoagulants. 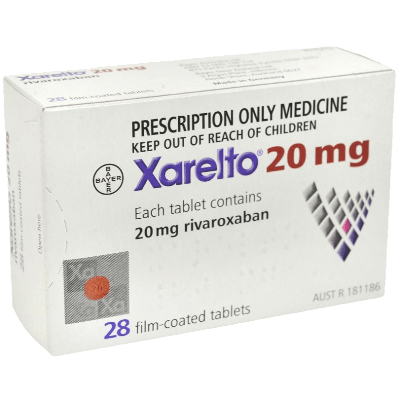 Xarelto is manufactured by Bayer Healthcare and marketed in the US by Janssen Pharmaceutical, a subsidiary of Johnson & Johnson. In 2016, the company enjoyed $2.2 billion in revenues from Xarelto alone. For the 4th quarter of 2017, Xarelto’s sales reached $710 million, gaining 19% in sales and exceeding analysts’ forecast of $669.5 million. The current forecast for 2018 shows a whopping $3.7 billion exclusively from the sale of  Xarelto.

How Does Xarelto Work?

Rivaroxaban, the active ingredient in Xarelto, prevents coagulation by binding into and inhibiting factor Xa, an enzyme that activates the clot formation process. Xarelto does not dissolve existing clots, but it can help prevent blood clots from gaining in number and size.

In contrast, warfarin (another common blood thinner) works by inhibiting an enzyme that activates Vitamin K, which is needed for the formation of blood clotting proteins. When excessive blood loss happens in patients taking warfarin, Vitamin K is administered to lessen the effects of warfarin and to effectively control the bleeding.

This is not the case with Xarelto since it follows a different mechanism of action. Its effects are currently irreversible. Since its approval in 2011, there has been no known antidote until recently. In May 2018, FDA approved Andexxa, a drug that can reverse the effects of Xarelto. Unfortunately, release to the public is not expected until 2019.

Severe Side Effects and FDA Warnings

All anticoagulants carry the risk of excessive bleeding the nature of the drugs; however, Xarelto poses a higher risk of severe and potentially fatal bleeding because of its uncontrollable and irreversible nature. Some of the common side effects experienced by those taking Xarelto include:

Over the years, FDA has issued two black box warnings for Xarelto. Black box warnings are considered the strictest alert placed on the label of prescription and are issued when reasonable evidence of a serious hazard is present with .

Xarelto’s black box warnings were added in August 2013, citing (1) discontinued use of Xarelto in patients with non-valvular atrial fibrillation increases the risk of stroke; and (2) risk of epidural and spinal hematoma.

An update was added in 2014 stating that the hematomas have occurred in patients treated with Xarelto while receiving neuraxial anesthesia or undergoing spinal puncture. This warning also required an addition to the label about the risk of uncontrollable bleeding without an antidote.

More safety warnings from FDA came in 2014, including the addition of platelet deficiency and hepatitis to the postmarketing adverse reactions, and a list of drugs that should be avoided at all cost when taking Xarelto. These are the following:

The Center for Disease Control and Prevention (CDC) released a report containing a study from 2013 to 2014 regarding emergency department visits for adverse effects from specific drugs. It showed that anticoagulants are the most common causes of adverse events which lead to emergency visits and hospitalization among older adults, with rivaroxaban (Xarelto) among the top 10 culprits for these incidences.

Internal Bleeding. In 2017, the Institute for Safe Medication Practices (ISMP) released a report identifying rivaroxaban as the primary drug suspect for serious injuries caused by anticoagulants.

Results from the 2016 FDA Adverse Event Reporting System (FAERS) data show that anticoagulants account for 18,978 serious injuries and 3,018 deaths in the country, with rivaroxaban responsible for 68.4% for these adverse events. 78.3% of the reported injuries and deaths were caused by internal bleeding.

Wound Complications. Another study in 2016 published in the Journal of Arthroplasty revealed that Xarelto significantly increased the incidence of periprosthetic joint infection, a complication of total hip arthroplasty and total knee arthroplasty.

Out of 159 patients that received the drug, 4 suffered from the complication after the procedure. On the other hand, only 1 out of 480 patients who did not take Xarelto experienced a deep infection post surgery.

To date, there are over 25,000 lawsuits filed against Janssen Pharmaceutical, Johnson & Johnson, and Bayer Healthcare for injuries and damages from Xarelto. The lawsuits against these companies are based on the following grounds:

In December 2017, a Philadelphia court ordered Bayer and Johnson & Johnson to pay $1.8 million in compensatory and $28 million in punitive damages to an Indiana couple regarding the companies’ failure to warn on Xarelto’s severe side effects, specifically on internal bleeding risks. Unfortunately, this was overturned in January 2018, following a motion to reverse the previous verdict. Three previous trials also ruled in favor of these companies, but they have yet to face thousands of other pending lawsuits both in federal and state courts.

Xarelto was originally marketed as a “one-size fits all” anticoagulant pill that offers more convenience over other traditional blood since it doesn’t require continuous blood monitoring and testing. However, given that thousands of patients experienced injuries from taking the drug, it’s clear that profits were prioritized over the safety of the general public.

Despite the fact that thousands of people have suffered uncontrollable bleeding events while taking Xarelto, both Bayer and Johnson & Johnson continue to make huge profits from this dangerous drug.

On March 25, 2019, Bayer and Johnson & Johnson announced a $775 million settlement for over 25,000 Xarelto lawsuits both in federal and state courts.

If you or your loved one experienced a severe bleeding event or other serious injuries from taking Xarelto, Maxwell Law Group can help get you the compensation you deserve. Call (844) 525-7155 or fill out the form below and we’ll investigate your case at no charge to you.