Temporary hair loss is often a side effect of chemotherapy. However, some current lawsuits claim that cancer patients have experienced permanent hair loss (alopecia) after being treated with Taxotere.

Patients who have suffered from alopecia and other side effects due to Taxotere may be eligible to pursue a claim and seek financial compensation.

If you or a loved one was treated with this chemotherapy drug and suffered irreversible baldness, contact Maxwell Law Group LLP today. We can answer your questions and review your case for free.

How Does Taxotere Work?

For help understanding your options if you’ve been injured by Taxotere, reach out to our firm or call (844) 525-7155.

Taxotere (generic name: docetaxel) is a chemotherapy drug used to inhibit cell division and promote cell death. It belongs to a group of chemotherapy drugs called taxanes, which come from plant alkaloids, specifically the bark of the Pacific Yew tree. It is used to treat various kinds of cancers including breast cancer, metastatic non-small cell lung cancer, as well as prostate, stomach, head, and neck cancers.

Although usually mixed with other chemotherapy agents, Taxotere can also be prescribed by itself. It is administered via an intravenous infusion. The dose and treatment schedule depends on several factors like height and weight, other health issues, and the specific type of cancer being treated.

Taxotere is manufactured by Sanofi (formerly Sanofi-Aventis), a global pharmaceutical company with 2017 annual revenues of over 40 billion dollars. 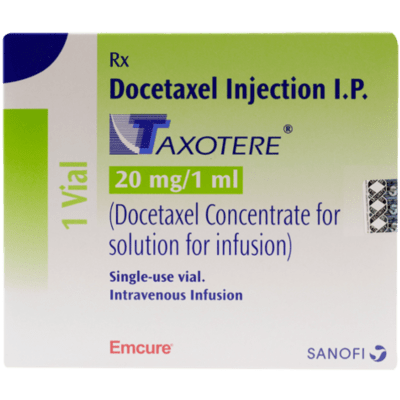 How Does Taxotere Work?

Healthy, normal cells in the body can regulate their ability to divide. In cancer cells, mutations cause this specific ability to become faulty, causing them to multiply uncontrollably. The uncontrolled replication of cancer cells results in tumors forming with the body.

Chemotherapy agents, or anti-cancer drugs, work by stopping cell division (mitosis) by damaging the DNA or RNA (protein codes) that gives instructions to the cell to copy itself. Taxanes, including Taxotere, specifically target microtubules, which are thread-like structures that are essential to mitosis. This effectively stops the cells from reproducing further and promotes apoptosis or cell death.

There is no accurate way for the drug to target cancer cells only. It works by inhibiting mitosis for all rapidly reproducing cells, regardless of whether the cells are cancerous.

This process explains why the common side effects of Taxotere include a disturbance to these tissues, like hair loss (alopecia), vomiting and diarrhea, and increased risk of bruising, bleeding, and infections.

In addition to permanent hair loss, other common side effects of Taxotere include:

In 2006, Sanofi released an internal study stating that only 3% of patients who received Taxotere experienced long-term hair loss (known as alopecia). However, in the same year, a study conducted by Dr. Scot Sedlacek from Rocky Mountain Cancer Centers showed that the risk of permanent hair loss increases when Taxotere is combined with doxorubicin and cyclophosphamide. Out of 112 breast cancer patients that received the drug cocktail, 6.3% grew back less than 50% of their hair.

When Taxotere causes Alopecia, all body hair is affected, including eyebrows, eyelashes and pubic hair.

Sanofi revised Taxotere’s warning label in 2005 for some European countries to include a warning that some permanent hair loss had been observed in patients taking Taxotere.

Despite the fact that this warning was published in many European countries in 2005, this warning was not published in the US until 10 years later, in December 2015, when FDA added the same warning under adverse reactions in the label. While alopecia was indicated as a side effect prior to this addition, there was no indication that Taxotere could cause permanent hair loss.

A study published by The Annals of Oncology in 2012 revealed that all 19 breast cancer patients in the study who received the chemotherapy drug combination fluorouracil/epirubicin/cyclophosphamide (FEC) followed by docetaxel (Taxotere) experienced hair loss within 2 weeks of the FEC cycle, up until the end of the docetaxel cycle.

Within 4 to 6 months, hair regrowth was observed, but it was marked with thinning hairs, with hair loss primarily over the crown of the head, similar to male pattern baldness. It was also associated with eyebrow and eyelash hair loss. Hair regrowth treatment was prescribed and administered; unfortunately, they were all deemed ineffective.

In addition, a quality of life assessment tool was administered and revealed distressing psychological consequences from permanent alopecia, possibly stemming from its impact on body image.

As a response to this permanent adverse effect, affected cancer patients from around the globe created the organization A Head of Our Time, which serves as a community for emotional support, medical research comparison, and health education.

To date, over 9,500 lawsuits have been filed against Sanofi, mostly from breast cancer patients and their families. The main grounds for the lawsuit include failure to warn healthcare providers and patients about the risk of permanent hair loss, as well as downplaying the side effects caused by the drug.

On October 2016, Taxotere hair loss lawsuits were consolidated to multi-district litigation (MDL) in the US District Court for the Eastern District of Louisiana. (An MDL consolidates multiple similar lawsuits together into one venue for ease of judicial administration.) Four bellwether trials are already scheduled:

Meanwhile, in August 2018, Taxotere cases were granted multicounty litigation (MCL) status in New Jersey, where Sanofi’s U.S. headquarters are located. Currently, there are over 350 complaints pending in state court.

If you or your loved one experienced gynecomastia and its complications after taking Risperdal, Maxwell Law Group can help get you the compensation you deserve. Call (844) 525-7155 or fill out the form below take the first step in protecting your rights.