Male patients who have experienced breast enlargement while taking Risperdal may be eligible to pursue a claim and seek financial compensation.

Risperdal was originally approved as an antischizophrenic drug. It later received FDA approval for treatment of bipolar disorder and irritability associated with autism disorders. The medication has also been extensively prescribed for patients with ADHD among children and adolescents.

Unfortunately, many boys and men who used the medication developed gynecomastia, or abnormal enlargement of the breasts. Thousands of lawsuits have been filed against manufacturer Janssen Pharmaceuticals and its parent company Johnson & Johnson regarding this severe side effect.

If you or a loved one was treated with Risperdal and suffered breast enlargement and its complications, contact Maxwell Law Group LLP today. We can answer your questions and review your case for free.

How Does Risperdal Work?

For help understanding your options if you’ve been injured by Risperdal, reach out to our firm or call (844) 525-7155.

Risperdal (generic name: risperidone) is an antipsychotic drug used to treat schizophrenia, bipolar disorder, and irritability associated with autism disorders. It received FDA approval in 1993, making it one of the oldest atypical antipsychotic drugs released in the market.

Risperdal has also been heavily marketed for the treatment and management of ADHD and other behavioral disorders in children. It’s estimated that in 2000, more than one-fifth of Risperdal users were children and adolescents. The FDA approved the drug for pediatric use in 2006, specifically for autism-related irritability in children and adolescents aged 5 to 16 years old.

The drug is manufactured by Janssen Pharmaceuticals, a subsidiary of Johnson & Johnson. In 2007, the company’s sales grew to $1.06 billion from Risperdal alone. The company has ultimately earned roughly $18 billion in revenues over the past two decades from Risperdal.

Gynecomastia (abnormal enlargement of the breasts)

How Does Risperdal Work?

Although the exact mechanism of action of risperidone (Risperdal) is not yet completely understood, there are current theories that attempt to shed light on how the drug works.

All antipsychotics reduce dopamine levels in the brain. Dopamine is a neurotransmitter that has been connected with schizophrenia—and an overactive dopamine system may result in the disease. Risperidone blocks D2 and 5-HT2A receptors, which are responsible for processes affecting a person’s mood, behavior, and learning.

The drug was synthesized to recreate the effects of clozapine, an antipsychotic drug used only when the patient has not responded to other medications.

Risperidone was developed to lessen the risk of extrapyramidal symptoms by decreasing D2 and 5-HT2A levels.

Risperdal is also used as a medication to manage autism, reducing unfavorable behaviors like repetition, aggression, and hyperactivity.

Controlling these behaviors mean that the pediatric patient can perform in school, participate in psychological therapies, and engage in social interactions.

Risperdal comes with a variety of warning and precautions, including:

A study conducted in 2006 showed that prolactin blood levels were above the normal range for adolescent patients who were treated with risperidone (Risperdal) at doses common for psychotic symptoms.

Prolactin is a hormone which enables milk production in females. In men, one of the effects of increased prolactin levels is gynecomastia, where breast tissues become enlarged and can possibly cause pain and tenderness in the area.

In a study published in the Journal of Child and Adolescent Psychopharmacology in 2015, it was revealed that patients taking risperidone (Risperdal) had approximately 4 times the risk of developing gynecomastia compared to non-users. The study involved 401,924 males aged 15 to 25 and observed 1,556 cases of gynecomastia. Moreover, focused data on children and adolescents only (below 18 years old) noted a 5 times higher risk of gynecomastia.

Young boys and men who experience gynecomastia often report pain and swelling in the breast area as well. Gynecomastia also causes them social anxiety, embarrassment, physical intimacy issues, and other psychological and emotional problems. Many of those who have suffered from gynecomastia have had to undergo mastectomy operation to correct the condition.

Johnson & Johnson was ordered to pay $1.1 billion to the state of Arkansas in 2012 in relation to the Medicaid after the company was found guilty of misleading both doctors and patients about the risks of Risperdal. The verdict came after the jury found out that the company engaged in deceptive acts by mailing a letter to roughly 6,000 doctors across the state claiming that the drug was safer than its competitors. Several other states filed lawsuits against the company on the grounds of deceptive marketing in the treatment of dementia and mood disorders while also downplaying risks the company already knew about the drug.

In 2015, a Philadelphia jury decided that Johnson & Johnson must pay $2.5 million to a male patient who developed gynecomastia after taking Risperdal. The plaintiff was prescribed with the drug in and developed abnormally large breasts as a result. The lawsuit was filed on the grounds that the company concealed the risk of gynecomastia associated with the drug. This case was the first Risperdal trial to favor the victim over the company.

In 2016, another person who had suffered from the side effects of Risperdal won a lawsuit against the pharmaceutical company. In this case, the plaintiff developed gynecomastia at the age of five after being prescribed with Risperdal. The jury awarded his family $70 million after the jury found Janssen Pharmaceuticals and its parent company Johnson & Johnson guilty of failing to warn the doctor and parents about the risk of developing gynecomastia, and intentionally hid evidence specific to the case.

To date, thousands of lawsuits have been filed against Janssen Pharmaceuticals and Johnson & Johnson for injuries and harm caused by Risperdal In particular, the lawsuits allege that the manufacturers failed to warn the public about the risk of developing gynecomastia. In addition, the manufacturers, engaged in questionable marketing and promoted the drug as a safe medication for children in spite of knowledge of the severe side effects.

The plaintiffs claim that Janssen Pharmaceuticals and Johnson & Johnson actively hid evidence from the FDA and the public regarding the risk of gynecomastia, choosing to place profits over patient safety. 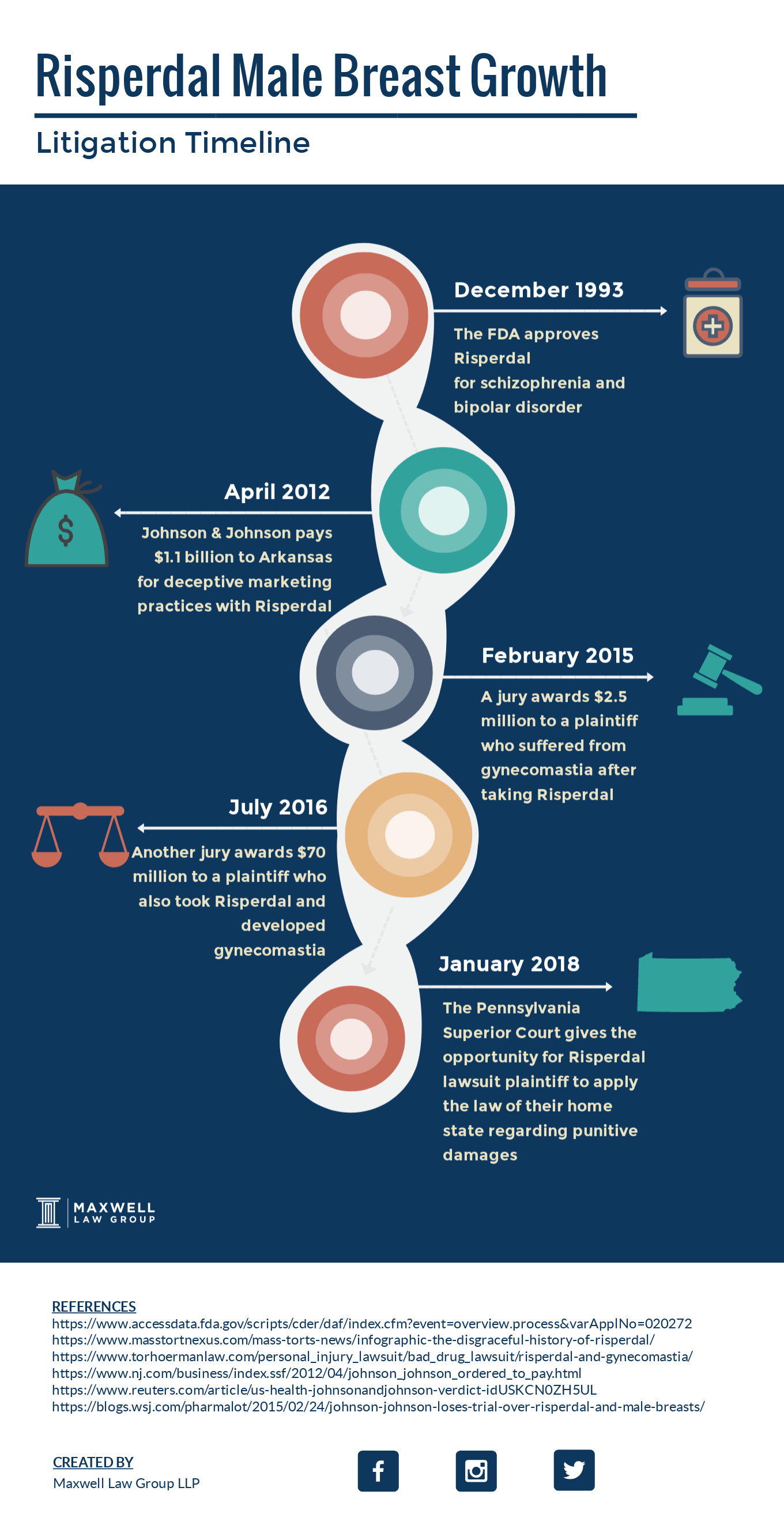 If you or your loved one experienced gynecomastia and its complications after taking Risperdal, Maxwell Law Group can help get you the compensation you deserve. Call (844) 525-7155 or fill out the form below take the first step in protecting your rights.