Patients who have experienced blood loss and other side effects while taking Pradaxa may be eligible to pursue a claim and seek financial compensation.

Pradaxa is an anticoagulant that prevents blood clots from forming. Unfortunately, it was also released without an antidote, and caused thousands of injuries and deaths due to excessive and internal bleeding. While the drugmaker paid $650 million to settle 4,000 lawsuits in 2014, another round of litigation has been started by victims who did not participate in that Pradaxa settlement.

If you or a loved one took Pradaxa and suffered severe bleeding or other adverse effects, contact Maxwell Law Group LLP today. We can answer your questions and review your case for free.

How Does Pradaxa Work?

Risks and Side Effects

Similar to Xarelto, Pradaxa (generic name: dabigatran) is an anticoagulant prescribed primarily for patients with atrial fibrillation (heart rhythm irregularities) to prevent stroke and other blood clot complications. It can also be used for the treatment of deep vein thrombosis and pulmonary embolism.

Pradaxa received FDA approval in 2010 and was designed to be an alternative to warfarin, a traditional blood thinner. Pradaxa’s use increased in 2012 when it was alleged that the drug had a lower risk of clot-related stroke, brain hemorrhage, and death, based on a study with Medicare patients. In 2013, it was estimated that more than 6.2 million patients had been prescribed with Pradaxa since its launch.

Pradaxa is manufactured by German pharmaceutical company Boehringer Ingelheim. In 2014, the company received a total of $1.3 billion in sales from Pradaxa—making it one of their best-selling drugs. However, sales have since stagnated due to safety concerns surrounding the drug.

How Does Pradaxa Work?

The active ingredient in Pradaxa, dabigatran, prevents the formation of blood clots by inhibiting thrombin, ultimately preventing the clot development process to complete. While it does not dissolve existing blood clots, it lowers the chances of further blood clot formation and its complications.

When Pradaxa was approved, there was no known antidote to combat its anticoagulant effects in cases of excessive blood loss. In contrast, warfarin can be counteracted by Vitamin K, decreasing its blood-thinning effects and effectively controlling the bleeding.

In 2015, gave approval to Praxbind, a drug that can reverse Pradaxa’s effects in emergency situations.

Ironically, it is also manufactured by the same pharmaceutical company that produces Pradaxa. Praxbind received full approval in April 2018. However, there are new concerns about this drug.

Praxbind appears to successfully reverse the effects of dabigatran. However, no long-term, large-scale studies have shown that Praxbind does not cause serious side effects of its own. Many are worried that it may not be as effective as initial studies indicate, which could lead to further injuries and severe side effects.

Risks and Side Effects

Bleeding is a common risk when taking Pradaxa since the drug’s intended effect is to lessen and prevent blood clots. However, given that Pradaxa had no antidote when it was released to the market, it poses a higher risk of severe bleeding among patients.

Aside from uncontrollable and potentially fatal bleeding, Pradaxa can also cause internal and prolonged bleeding, the symptoms of which are the following:

In 2013, added a black box warning for Pradaxa: discontinuing the drug without adequate continuous anticoagulant treatment increases the risk of stroke and other thrombotic events. Another black box warning was added in 2015, citing the possible occurrence of epidural or spinal hematoma for those taking Pradaxa and receiving neuraxial anesthesia or undergoing spinal procedures.

Over the years, multiple warnings were added to Pradaxa’s informational label:

Within the first year of public release, Pradaxa was linked to 932 adverse events, with 505 cases involving hemorrhage. The drug’s manufacturer eventually confirmed 260 deaths occurred due to internal bleeding.

Harvard Health Publishing revealed in 2014 that Pradaxa has a higher bleeding risk compared to warfarin. This contradicts Boehringer Ingelheim’s claim that the newer anticoagulant was as effective as the traditional blood thinners with the benefit of fewer adverse bleeding effects and the convenience of lesser blood tests. Harvard Health Publishing cited a study conducted at the University of Pittsburgh among Medicare patients showing that 9% of those who took Pradaxa suffered from a major bleeding event, while only 6% of those taking warfarin experienced its adverse bleeding effects.

Moreover, bleeding sites differed for each drug. Stomach and intestinal bleeding were higher among Pradaxa users. A higher risk of major bleeding was also observed among African American patients with chronic kidney disease.

Over 4,100 lawsuits were filed against Pradaxa from 2011 to 2014, on the claims that the manufacturer failed to warn healthcare providers and patients of its severe and uncontrollable bleeding risks. They also allegedly misled consumers about its benefits and advantages over warfarin.

Even after the initial settlement, thousands of patients and affected families have continued to file lawsuits against Pradaxa. Currently, Boehringer Ingelheim is still facing many cases due to injuries allegedly caused by Pradaxa. 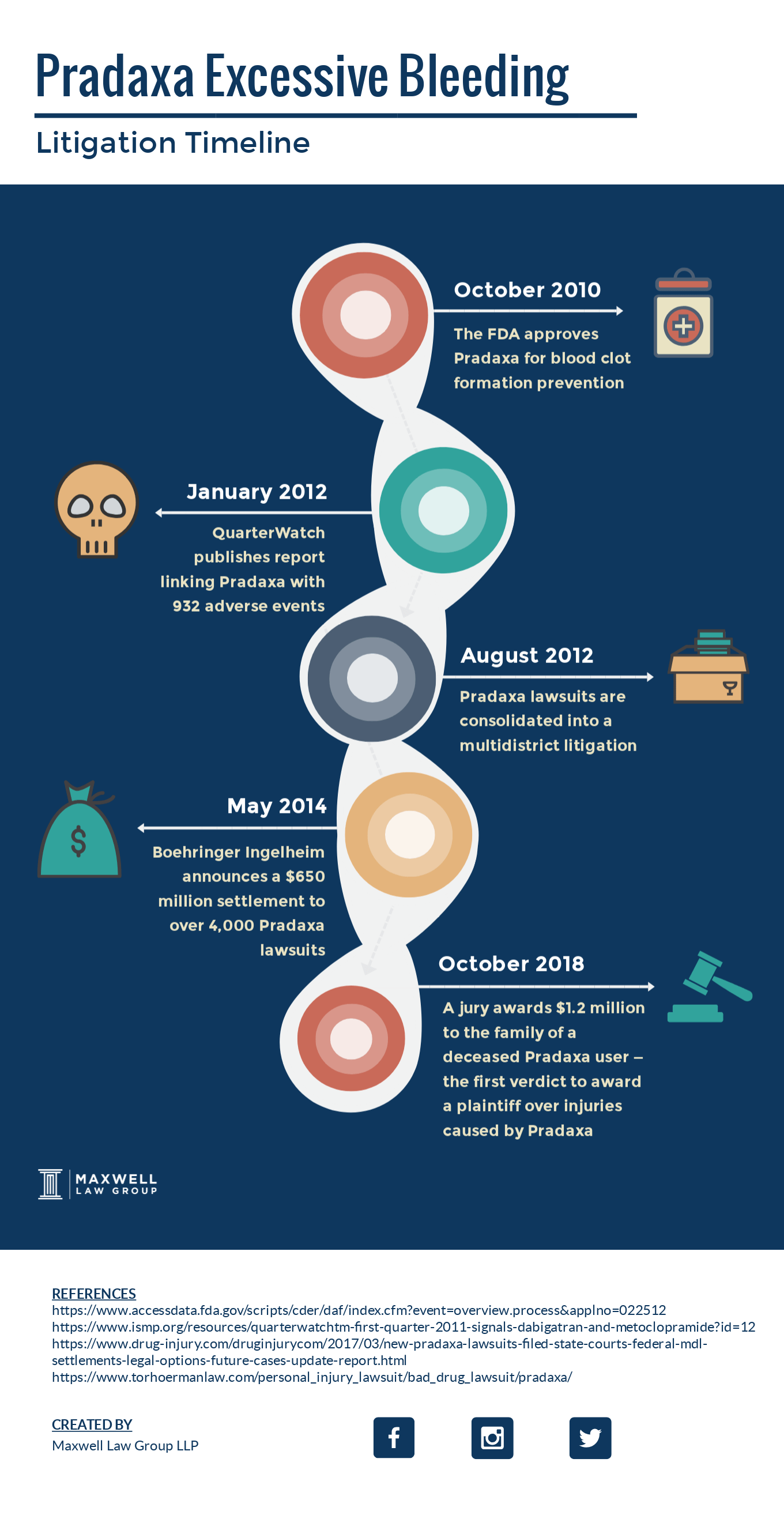 If you or your loved one experienced excessive bleeding or other serious injuries from taking Pradaxa, Maxwell Law Group can help get you the compensation you deserve. Call (844) 525-7155 or fill out the form below and we’ll investigate your case at no charge to you.