Patients who developed Parkinson’s disease after being exposed to Paraquat may be eligible to pursue a claim and seek financial compensation.

Paraquat is a chemical herbicide primarily used for weed and grass control. It is classified by the US Environmental Protection Agency as restricted use, meaning people who intend to use the substance are required to have a license. Over the years, there have been multiple reports of people exposed to Paraquat developing Parkinson’s disease. As a result, patients and their families have filed lawsuits against the manufacturer for failing to warn users of the long-term health risk of the product.

If you or a loved one was exposed to Paraquat and developed Parkinson’s disease, contact Maxwell Law Group LLP today. We can answer your questions and review your case for free.

How Does Paraquat Work?

For help understanding your options if you’ve been injured by Paraquat, reach out to our firm or call (844) 525-7155.

Paraquat is a highly toxic chemical herbicide used primarily for weed and grass control. It has been commercially available for farming and agriculture in liquid form with various concentrations.

It was first manufactured by Imperial Chemical Industries in 1961 but has since been produced by several manufacturers, including Syngenta, and Chevron Chemical Company.

Paraquat was sold under the following names:

Paraquat is prohibited for residential use as the Environmental Protection Agency (EPA) classifies it under restricted use and can only be utilized by people with a certified applicator license. It is one of the most common commercial herbicides used as an alternative to Roundup.

How Does Paraquat Work?

Paraquat kills weed and grass growth by inhibiting photosynthesis by starting a process that results in the release of destructive elements called reactive oxygen species. These elements also produce the oxidized form of Paraquat, repeating the process and inducing cell damage.

Paraquat is a highly poisonous chemical with no known antidote if ingested. The form commercially available in the US is mixed with blue dye to prevent mixing it into consumable beverages such as coffee or juice, and an added agent to induce vomiting if accidentally swallowed. It also has a strong odor to serve as a caution.

Paraquat is banned across 32 countries and is listed as a banned substance throughout the European Union since 2013. While Syngenta manufactures Paraquat in Northern England, a majority of the finished product is delivered and sold in the US.

The EPA also announced through a regulatory filing in March 2016 that it would further explore the health risks linked with Paraquat as part of a self-sponsored program that regulates pesticides every 15 years.

In July 2021, the EPA released an interim decision for stronger protection against Paraquat exposure. These include limiting application to a certain area size per 24 hour period, requiring a residential area drift buffer for all aerial applications, prohibiting human flaggers, pressurized handguns and backpack sprayers, and other stricter and more defined measures of exposure prevention.

Paraquat poisoning happens with accidental ingestion, inhalation, or skin exposure to the chemical. There is an increased risk of poisoning with prolonged skin exposure, a higher concentration of Paraquat, or contact with broken skin (sores, cuts, or rashes).

The extent of Paraquat poisoning depends on the amount, router, and duration of exposure. The person’s current health condition at the time of exposure is also a substantial factor. Paraquat damages body parts that it comes directly in contact with and can cause toxic chemical reactions to vital organs such as the kidney, liver, and lungs.

Signs and symptoms of Paraquat poisoning include:

People who are exposed to Paraquat are also at risk of serious long-term neurological disorders including Parkinson’s disease, multiple system atrophy, and progressive supranuclear palsy.

The earliest Paraquat lawsuits were filed in 2016. These lawsuits allege that Syngenta and Chevron Chemical Company USA failed to warn the public about the increased risk of developing Parkinson’s disease from Paraquat exposure, and that the product is defective. Many of the plaintiffs are agricultural workers, licensed applicators, landscapers, and people who are located near areas that are regularly treated with Paraquat who developed Parkinson’s disease.

In June 2021, the Judicial Panel on Multidistrict Litigation has ordered the consolidation of all Paraquat lawsuits into multidistrict litigation (MDL). There are currently 90 Paraquat lawsuits filed across state and federal courts from agricultural workers, their families, and other individuals who developed Parkinson’s disease after being exposed to Paraquat. 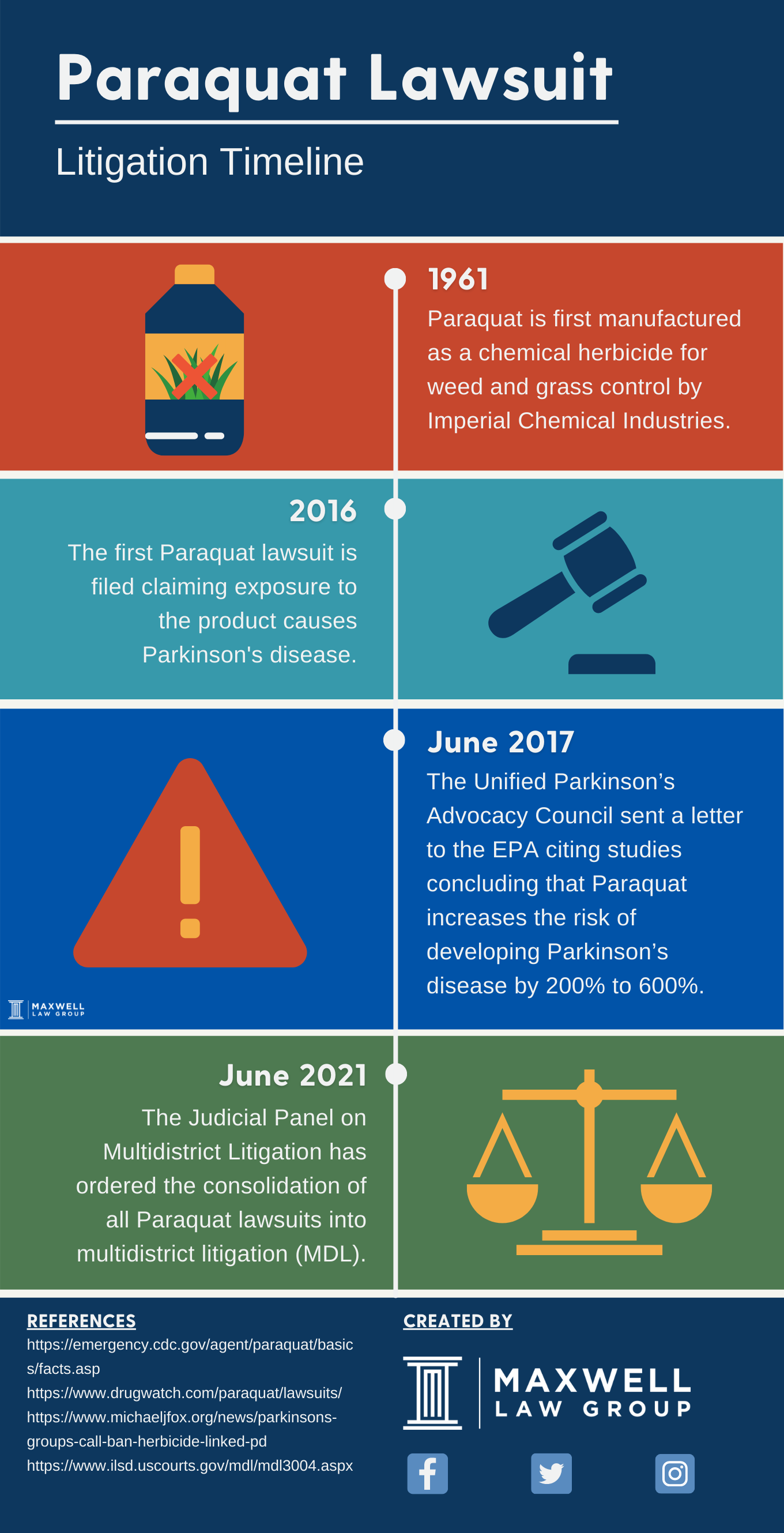 If you or your loved one developed Parkinson’s disease after being exposed to Paraquat, Maxwell Law Group can help get you the compensation you deserve. Call (844) 525-7155 or fill out the form below take the first step in protecting your rights.