Patients who have developed kidney problems after taking Nexium or Prilosec may be eligible to pursue a claim and seek financial compensation.

Nexium and Prilosec are heartburn medicines belonging to a class of drugs called proton pump inhibitors. They are used to treat symptoms caused by acid reflux. They can also help the healing process of the esophagus and stomach lining and prevent ulcer formation.

Over the years, studies have shown that proton pump inhibitors increase the risk of kidney injuries, including acute nephritis, renal failure, acute kidney injury, and chronic kidney disease. As a result, thousands of patients and affected family members have filed lawsuits against the drug manufacturers on the grounds that they failed to warn the public about these risks.

If you or a loved one took Nexium or Prilosec and experienced kidney failure or other complications, contact Maxwell Law Group LLP today. We can answer your questions and review your case for free.

What are Nexium and Prilosec?

How Do Nexium and Prilosec Work?

Injuries from Nexium and Prilosec

For help understanding your options if you’ve been injured by Nexium or Prilosec, reach out to our firm or call (844) 525-7155.

What are Nexium and Prilosec?

Nexium (generic name: esomeprazole) and Prilosec (generic name: omeprazole) are non-prescription oral medications used to treat specific stomach and esophageal problems like acid reflux and ulcer. They can relieve symptoms such as heartburn, difficulty swallowing, and persistent cough. They also help heal the damage done by acid to the stomach and esophagus lining, preventing ulcer and cancer.

Nexium was approved by the FDA in 2001, while Prilosec was approved in 1989, both of which are produced by the pharmaceutical company AstraZeneca. Prilosec’s patent expired in 2001, prompting the company to release Nexium as a patented replacement drug. The latter became one of the best-selling drugs in the US, with an estimated annual sales of $3 billion before generic versions were released to the market.

How Do Nexium and Prilosec Work?

In acid reflux, stomach acid flows back up to the esophagus and causes burning pain in the chest, also known as heartburn. It can damage the esophageal lining, and if recurrent, can cause serious complications such as esophageal cancer.

Nexium and Prilosec are proton pump inhibitors which suppress gastric acid secretion. By inhibiting H+/K+-ATPase in the gastric parietal cell, they stop the final step in acid production and decreases gastric acid activity.

The FDA has released several warnings about the use of proton pump inhibitors over the years. These warnings include the risk of osteoporosis and fracture in higher doses for longer periods, low magnesium levels, and Clostridium –associated diarrhea. Other warnings include gastritis and risks with antibiotics.

Injuries from Nexium and Prilosec

In 2016, a study published in the Journal of the American Society of Nephrology looked into the association between proton pump inhibitors and chronic kidney disease (CKD). Researchers collected data from the Department of Veterans Affairs national and followed 173,321 patients taking PPI and 20,270 users of H2 blockers, another type of heartburn medication, over 5 years to compare and determine renal outcomes.

The researchers found out that PPI users had an increased incidence of CKD compared to those taking H2 blockers. They also had a significantly elevated risk of doubling creatinine levels, a compound usually filtered by the kidneys and excreted in the urine. The study suggested that PPI exposure is associated with increased risk of incident CKD and its progression.

Another study from the Journal of the American Medical Association in 2017 concluded that there is a 20% to 50% higher risk of CKD among PPI users. The study had 10,482 participants who were followed from 1996 to 2011. The association of PPI with CKD was present in all analyses, with twice-daily PPI takers linked with a higher CKD risk compared to once-daily users.

In addition, a study from Johns Hopkins University reviewed studies linking PPI with kidney disease development, including acute kidney injury (AKI), chronic kidney disease (CKD), and end-stage renal disease (ESRD). A majority of the studies showed a higher risk of kidney-related events among PPI users with 2 to 3 fold increased the risk of and 1.2 to 1.8 times greater risk of CKD and ESRD. The study states that stopping PPI therapy when there is no clear need for its use might reduce kidney disease count among the population.

In 2015, AstraZeneca paid the US government $7.9 million in relation to allegations that the company engaged in a kickback scheme with Medco Health Solutions to increase Nexium sales. They marketed Nexium as a safer and far more effective drug compared to Prilosec. Both drugs are classified as PPIs, and consequently, have the same effectiveness and side effects. Thus, the company was engaging in falsely advertising Nexium to the public.

Lawsuits against manufacturer AstraZeneca were first filed in 2016; to date, there are more than 4,700 lawsuits against the company, with 2,000 more still under pending status. A New Jersey federal court consolidated around 160 lawsuits into multidistrict litigation (MDL 2789) in 2017, with bellwether trials scheduled in 2020.

PPI lawsuits claim that AstraZeneca, along with five other PPI manufacturers, did not test the drugs properly prior to releasing them into the market. The lawsuits allege that the manufacturers also failed to warn the public about the increased risk of kidney complications when using Nexium or Prilosec.

As a result, thousands of patients have suffered from acute interstitial nephritis, kidney injury and failure, and chronic kidney failure after taking these drugs. 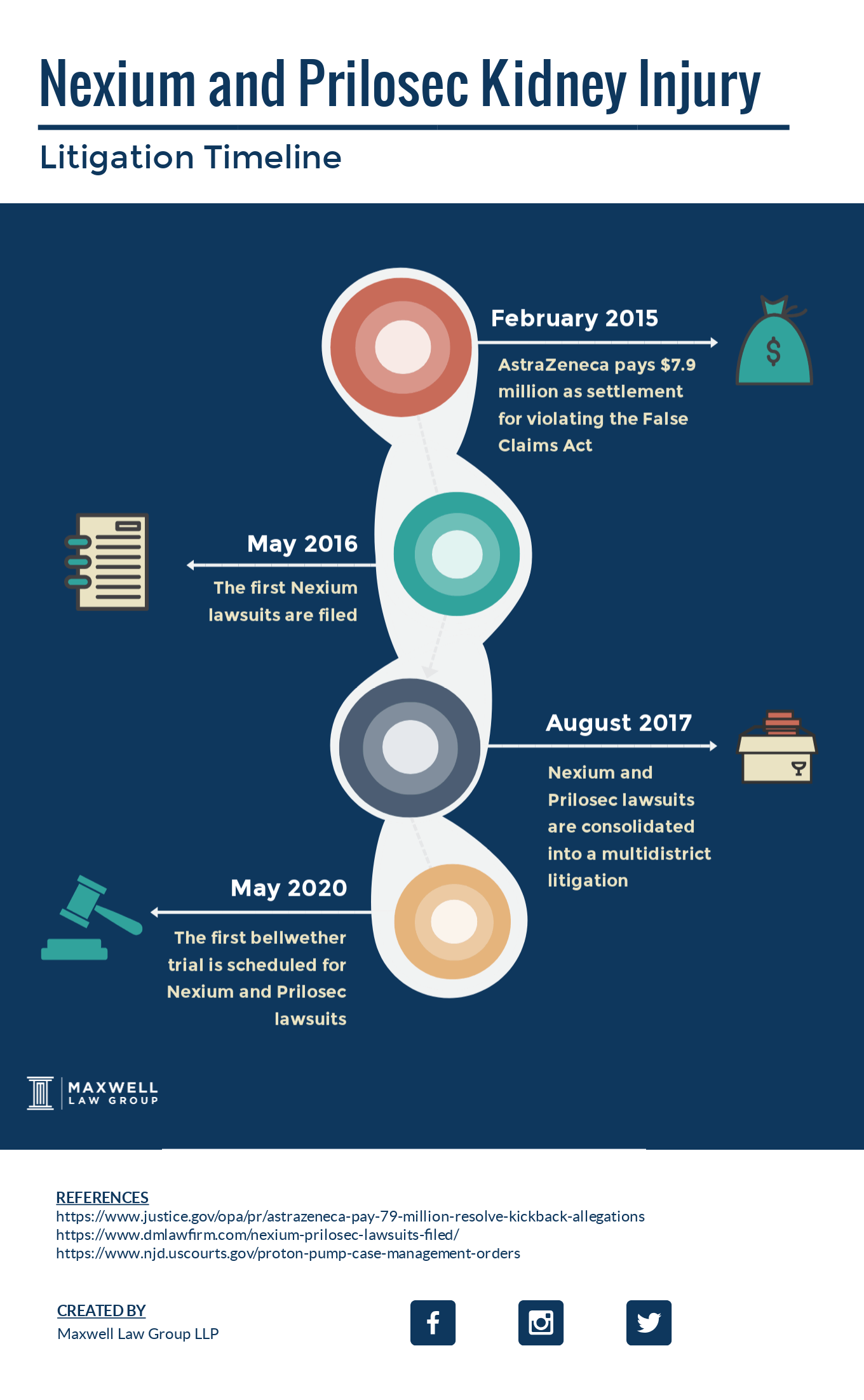 If you or your loved one developed kidney problems after taking Nexium or Prilosec, Maxwell Law Group can help get you the compensation you deserve. Call (844) 525-7155 or fill out the form below and we’ll investigate your case at no charge to you.