Patients who have suffered from leg or foot amputation side effects while taking Invokana may be eligible to pursue a claim and seek financial compensation.

Invokana is an oral type 2 diabetes medicine that lowers blood glucose by encouraging excretion via the urine. Over the years, multiple studies have shown that Invokana increases the risk of some life-altering health conditions including lower limb amputations, serious genital infections, and kidney issues. To date, there are over 1,000 lawsuits against Johnson & Johnson subsidiary Janssen Pharmaceutical—the manufacturer of this dangerous drug.

If you or a loved one was treated with this diabetic medication and suffered from severe adverse effects, contact Maxwell Law Group LLP today. We can answer your questions and review your case for free.

How Does Invokana Work?

For help understanding your options if you’ve been injured by Invokana, reach out to our firm or call (844) 525-7155.

Similar to Januvia, Onglyza, and Victoza, Invokana (generic name: canagliflozin) is used for the treatment of type 2 diabetes by helping reduce blood glucose levels. It is usually taken in combination with metformin, another antidiabetic maintenance drug. Invokana was also marketed for weight loss and blood pressure management.

Invokana received FDA approval in 2013 and was the first in its drug class to be approved in the US. When it was released, manufacturer Janssen Pharmaceuticals, a subsidiary of Johnson & Johnson, claimed it was the only oral antidiabetic medicine that could improve blood sugar levels while reducing body weight and improving systolic blood pressure levels, based on clinical trials.

From this drug alone, Johnson & Johnson’s revenue increased from $586 million in 2014 to $1.31 billion the following year. However, due to risk and complication controversies, Invokana’s sales declined by 10% in 2017.

How Does Invokana Work?

Invokana belongs to a drug class called sodium-glucose cotransporter 2 (SGLT2) inhibitors. This drug class inhibits specific proteins which are mainly responsible for glucose reabsorption in the kidneys. As a result of increased glucose excretion in the urine, blood glucose levels are lowered in diabetic patients.

Despite initially receiving praise upon its approval and release into the market, Invokana would later inflict debilitating side effects in some of its users.

Ketoacidosis. On March 15, 2015, the FDA released a major safety announcement, warning the health community about a potentially life-threatening Invokana side effect. According to the agency’s press release:

“Type 2 diabetes medicines canagliflozin, dapagliflozin and empagliflozin may lead to ketoacidosis, a serious condition where the body produces high levels of blood acids called ketones that may require hospitalization.”

The FDA has cautioned individuals currently taking SGLT2 inhibitors, including Invokana, to watch for signs of ketoacidosis.

Amputation. In May 2017, the FDA released a black box warning for Invokana about the increased risk of lower limb amputation in patients with who are at risk or are already suffering from cardiovascular diseases. The warning came as a result of two clinical trials showing that leg and foot amputations were twice as often in patients taking canagliflozin (Invokana) compared to those who were treated with a placebo.

The FDA requires a black box warning for an increased risk of leg and foot amputations with Invokana, Invokamet, and Invokamet XR. This type of warning is the agency’s most serious warning.

Genital Infections. In August 2018, issued a warning about the occurrence of a rare but serious genital infection with SGLT2 inhibitors, which includes Invokana. The condition is called Fournier’s gangrene, also called necrotizing fasciitis of the perineum. Soft tissues, muscles, nerves, and blood vessels in and around the genitals become infected and die.

Other Potential Issues. Other warnings in using the drug include:

Just after a year from Invokana’s release, FDA already received reports of ketoacidosis requiring hospitalization following treatment with the antidiabetic medication. Warnings for various adverse effects resulting from studies and complaints followed suit over the years.

The FDA’s August 2018 black box warning stemmed from the agency receiving 12 cases of Fournier’s gangrene in patients taking the medication from 2013 to 2018. This is an alarming increase in cases of the rare condition, considering there had only been 6 previously known cases in patients taking other antidiabetic medication in more than 3 decades.

Diabetic Ketoacidosis. In 2016, another study published by the Journal of Investigative Medicine followed the case of a 62-year old patient who was diagnosed with type 2 diabetes and treated with canagliflozin (Invokana). After being on the medication for several months, the patient was rushed to the hospital and admitted to the ICU for severe metabolic acidosis secondary to diabetic ketoacidosis, related to canagliflozin treatment. The patient was hospitalized for 5 days before the symptoms subsided, and was released with instructions to avoid the drug.

Amputation Risk. Meanwhile, a recent retrospective study published by the Journal of the American Medical Association investigated the effects of canagliflozin and other SGLT-2 inhibitors on lower limb amputation. Results of the study, which involved 39,869 new users of SGLT-2 inhibitors, reinforced FDA’s findings that the drug poses a higher risk of lower extremity amputations (10.53 per 10,000 person-years) compared to other types of antidiabetic drugs (4.9 per 10,000 person-years).

Currently, there are over 1,000 lawsuits against Janssen Pharmaceutical filed by patients and families affected by Invokana’s debilitating and life-threatening side effects. These lawsuits are based on the claim that the pharmaceutical companies ultimately failed to warn consumers about the risks of the drug. The companies clearly chose to continue to market the drug as a safe antidiabetic medication with favorable weight loss and blood pressure effects, all while reports of its dangerous complications surfaced at an alarming rate.

The lawsuits have been consolidated into litigation in the District Court of New Jersey in 2016. Meanwhile, hundreds of lawsuits are still pending in federal and state courts, primarily in California and Pennsylvania. 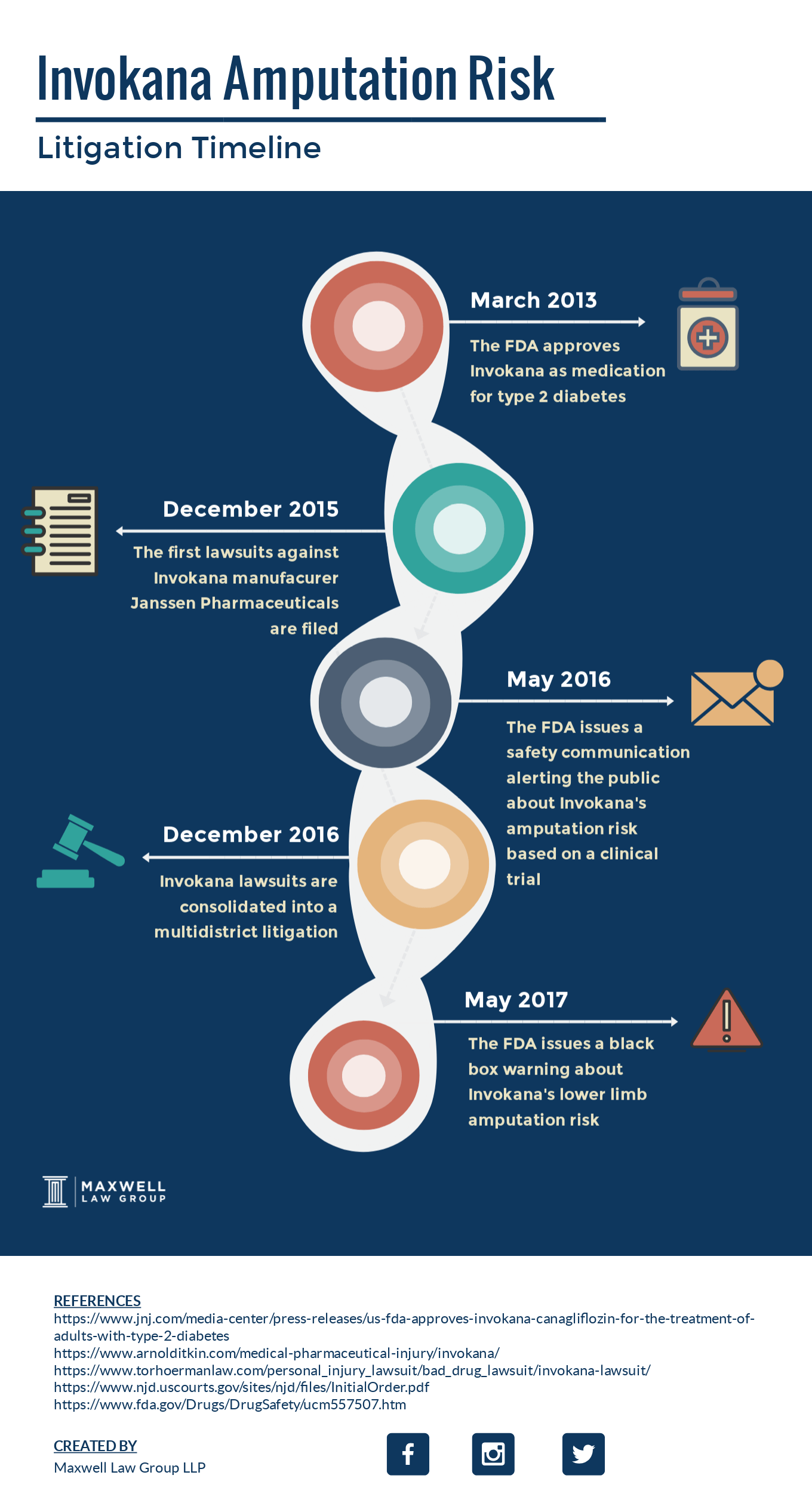 If you or your loved one suffered from lower extremity amputation or other severe adverse effects from taking Invokana, Maxwell Law Group can help get you the compensation you deserve. Call (844) 525-7155 or fill out the form below and we’ll investigate your case at no charge to you.