Patients who’ve experienced gadolinium deposition disease, gadolinium toxicity, or nephrogenic systemic fibrosis after being injected with gadolinium dye may be eligible to pursue a claim and seek financial compensation.

Gadolinium is a rare chemical element used as a contrast dye in magnetic resonance imaging (MRI) scans. Over the years, a handful of complications had been associated with the use of the contrast dye, mainly gadolinium deposition disease, gadolinium toxicity, or nephrogenic systemic fibrosis. Several FDA warnings had also been released resulting from studies and reports of gadolinium’s potential for these complications.

At this time, Maxwell Law Group is not accepting new clients who have been affected by Gadolinium.

What is Gadolinium and How Does it Work?

What is Gadolinium and How Does it Work?

A Magnetic Resonance Imaging (MRI) scan is a painless procedure performed to create detailed images of internal organs and tissues, often to help diagnose , identify an abnormality, or monitor a patient’s response to treatment. Some types of MRI scans need a contrast dye injected to the patient to illuminate certain tissues and blood vessels.

Gadolinium contrast mediums are one of the most commonly used contrast dyes for MRIs. It is used in 1 out of 3 MRI scans because it helps improve the visibility of smaller structures like inflammation, tumors, blood vessels, and blood supply.

Gadolinium contrast dye is administered via intravenous injection—usually while the MRI scan is ongoing. Gadolinium is excreted via the urine within 24 hours for patients who have normal kidney function. 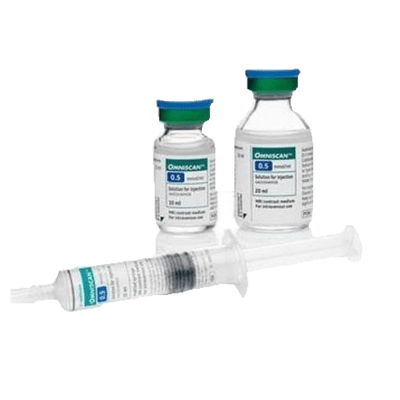 There are several manufacturers supplying gadolinium-based contrast dyes, including the following:

The American College of Radiology (ACR) has divided the different brands of GBCAs into three groups based on their risk of nephrogenic systemic fibrosis (NSF).

Omniscan, Magnevist and OptiMARK have the greatest number of NSF cases, according to the American College of Radiology.

In addition to severe adverse side effect that gadolinium dyes have been associated with, other side effects include:

The FDA has issued several safety communications and warnings regarding  gadolinium dye use:

The first safety communication was released in after the agency received a number of reports linking gadolinium-based contrast dyes to nephrogenic systemic fibrosis (NSF). NSF is a rare but serious disease that causes skin thickening and excessive pigmentation on large areas of the body including the arms, legs, and torso. It is a chronic condition, and while those with NSF may eventually experience some improvement in their condition, NSF can progress into a severe disability and ultimately cause death.

Additional information was released a few months later after the agency received a total of 90 reports of NSF. Healthcare professionals were recommended to weigh the benefits and risks when using gadolinium dyes, and to consider dialysis for patients with moderate to end-stage renal disease who had undergone an MRI scan with gadolinium dyes.

In 2007, the FDA added a black box warning to gadolinium dye brands Magnevist, MultiHance, Omniscan, Optimark, and ProHance, highlighting the risk for NSF in patients with acute or chronic severe renal insufficiency.

More required labeling changes came in 2010 to inform patients and health care practitioners of the risk of NSF. These recommendations included the following:

Another safety communication was released in 2015, stating that the agency was investigating the risk of brain deposits after repeated use of gadolinium dyes for MRI scans. The results of the investigation were released a couple of years later, in May 2017, stating that the review did not identify any adverse health effects due to brain retention of gadolinium-based contrast agents used for MRIs.

Healthcare professionals are advised to educate the patients prior to receiving the and to weight the risk of using it in patients who have a higher risk for gadolinium retention.

On May 21, 2018, four manufacturers of Gadolinium-Based Contrast Agents issued a joint warning to patients with normal kidney function. The manufacturers warned that gadolinium could remain in a patient’s body for months to years after injection. They warned that the highest concentrations of retained gadolinium were being found in a patient’s bones, followed by organs (such as the brain, skin, kidney, liver, and spleen). This occurred even with patients who had normal kidney function before having the MRI.

A study conducted in 2010 searched for gadolinium deposits in brain tumor biopsies in 28 patients without any severe renal impairments. The researchers found insoluble deposits positive for gadolinium in 7 biopsies from 5 patients. It also concluded that gadolinium retention deposits may be more frequent in patients who received more than one MRI scan with contrast dye used.

Another study published in Biometals in 2016 reviewed the potential basis of gadolinium toxicity and the clinical significance of gadolinium retention. It concluded that the rising data regarding gadolinium tissue accumulation, even in those with normal kidney function, gives the indication that toxicity and risks associated with gadolinium-based dyes must be seriously considered.

As gadolinium accumulates in the body, the patient becomes at risk for Gadolinium Deposition Disease (GDD). GDD is similar to NFS but has less severe symptoms, and can be experienced by patients with normal renal function. Signs and symptoms of GDD include a tight and burning sensation in the extremities, bone and joint pain, confusion, headaches, vision and hearing issues, hair loss, and in later stages, skin-related NFS symptoms. The disease is not yet fully understood, and no approved treatment course has been identified.

Known symptoms of gadolinium toxicity include:

In 2011, GE Healthcare reached a settlement regarding against Omniscan, one of the company’s gadolinium-based MRI contrast dyes. The lawsuit, filed in 2007, claimed that GE failed to warn healthcare providers and consumers about the risk of NFS associated with Omniscan. The amount was not disclosed in public. Bayer did the same and settled with plaintiffs who were injected with Magnevist back in 2009.

GE Healthcare was the center of another gadolinium litigation in 2013. Paul Decker was administered with gadolinium contrast dye during an MRI scan in 2005 while suffering from kidney failure. He subsequently suffered from NFS and was left severely disabled. The jury awarded the plaintiff with $5 million for losses due to Omniscan. The Sixth Circuit of the U.S. Court of Appeals denied the company’s request for appeal in 2015.

More recently, martial artist Chuck Norris and wife Gina filed a lawsuit against gadolinium dye manufacturers McKesson Corporation, Bracco S.p.A., and ACIST Medical Systems Inc. in November 2017. The lawsuit claims that Gina experienced intense burning sensations in her body after undergoing MRI scans with gadolinium-based dye. She reportedly had to travel to China to receive alternative treatments to alleviate the symptoms, although she still occasionally suffers from cramps and burning sensations. They are seeking a total of $10 million in damages.

Patients and families affected by the complications of gadolinium-based contrast dyes are still filing lawsuits on the grounds that the company knew or should have known about the risk of NFS and GDD when administering Gadolinium-based dyes. The manufacturers failed to inform the public about the risks of gadolinium-based dyes, including the increased risk for patients with kidney problems and gadolinium’s potential to be retained in patients’ bodies, including the brain, for months to years after receiving these drugs. 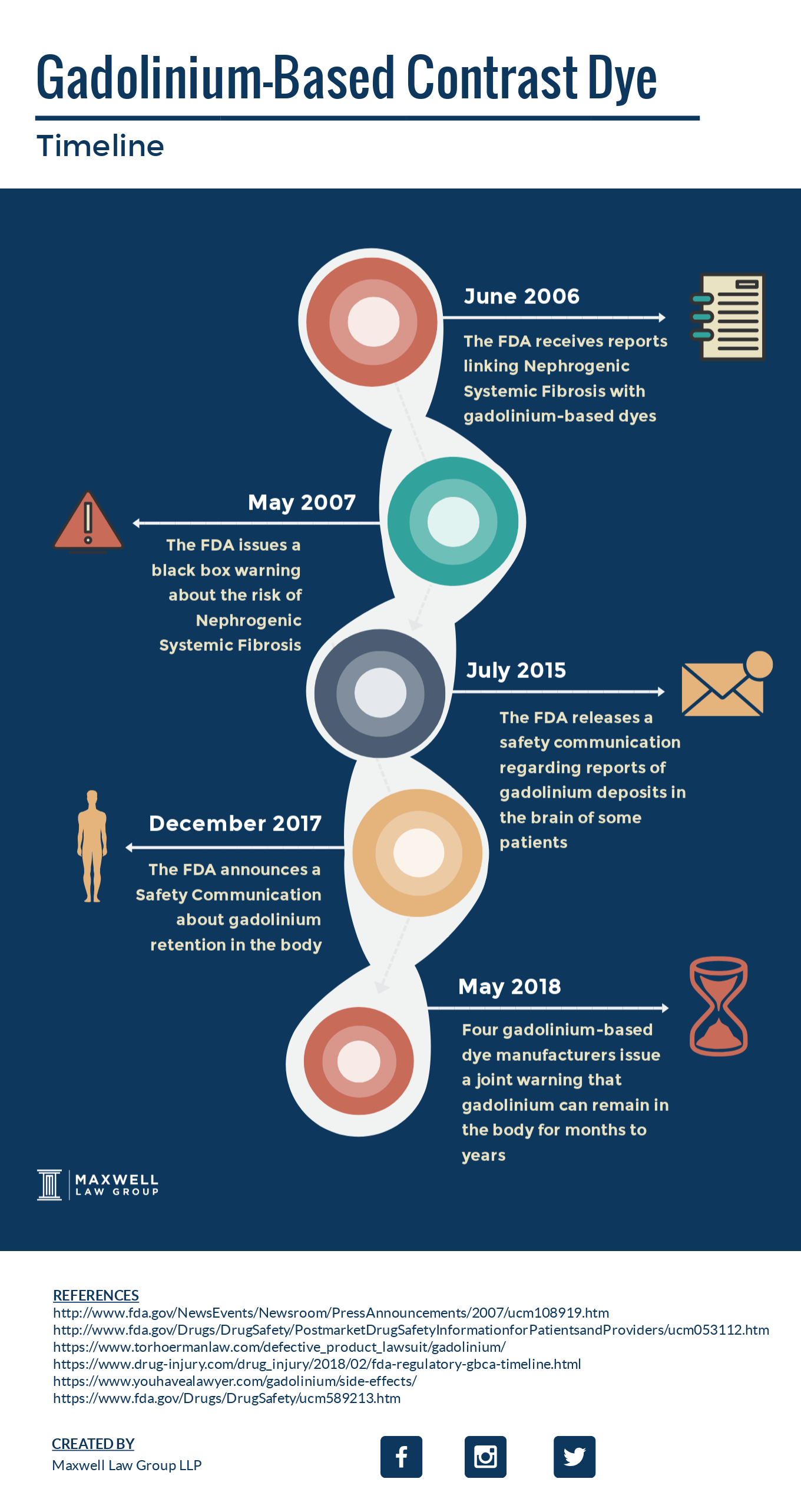