Patients who have suffered from aortic dissection and aneurysm and other aortic problems while taking Cipro, Levaquin, or Avelox may be eligible to pursue a claim and seek financial compensation.

Cipro, Levaquin, and Avelox are antibiotics used for the treatment of a wide variety of serious bacterial infections. They all belong to a class of antibiotics called fluoroquinolones, which is one of the most commonly used antibiotics in the US. They are also meant to be used when first-line antibiotics are not effective.

Studies have suggested that fluoroquinolones are linked with an increased risk of aortic rupture, dissection, and aneurysm, which can lead to hospitalization, surgery, and death.  As a result, lawsuits have been filed by patients and surviving family members against manufacturers of the drugs for failing to warn the public about these risks and marketing these fluoroquinolones as first-line antibiotics.

If you or a loved one took Cipro, Levaquin, or Avelox and suffered from aortic rupture and other aortic complications, contact Maxwell Law Group LLP today. We can answer your questions and review your case for free.

What are Cipro, Levaquin, and Avelox?

How Do Fluoroquinolones Work?

Injuries from Cipro, Levaquin, and Avelox

For help understanding your options if you’ve been injured by Cipro, Levaquin, or Avelox, reach out to our firm or call (844) 525-7155.

What are Cipro, Levaquin, and Avelox?

Cipro (generic name: ciprofloxacin), Levaquin (generic name: levofloxacin) and Avelox (generic name: moxifloxacin) belong to a class of antibiotic drugs called fluoroquinolones. Fluoroquinolones are broad-spectrum antibacterial agents that are used against gram-positive and gram-negative bacteria. They are usually used for respiratory and urinary tract but are also prescribed for some skin and bone infections.

The FDA approved Cipro in 2004 and Avelox in 1999 for manufacturer Bayer Pharmaceuticals. Merck & Co. is a partner co-maker for Avelox. Meanwhile, Levaquin was approved in 1998 for Johnson & Johnson. Bayer and Merck & Co. had $1 billion in sales from Cipro and Avelox, while Johnson & Johnson had $1.3 billion of sales from Levaquin in 2010 alone. It’s estimated that the antibiotic industry will reach $45.09 billion in 2019, with fluoroquinolones having a 16.6% share of the market.

How Do Fluoroquinolones Work?

Fluoroquinolones stop bacterial replication by blocking their DNA replication pathway. It irreversibly binds to DNA gyrase, which inhibits relaxation of the DNA supercoils during replication. Since the supercoils are still intertwined, DNA synthesis cannot take place. It also inhibits Topoisomerase IV which prevents separation of the replicated DNA. This action stops bacterial growth and results in bacterial cell death.

In 2008, the FDA required a black box warning to be added all fluoroquinolones warning health care providers and users about the increased risk of tendinitis and tendon rupture. Another safety communication was released in 2013 requiring label changes to reflect the serious and permanent side effect of peripheral neuropathy from using these antibiotics.

Additional safety communication was released in 2016, specifically regarding the disabling effects of the drug, which can involve the tendons, muscles, joints, nerves, and central nervous system. Fluoroquinolones should be used only in patients with respiratory infections that do not have any alternative options.

The information was updated in 2017, stating that the FDA’s findings on published studies currently do not support reports that fluoroquinolones cause retinal detachment, and aortic rupture, dissection, or aneurysm. However, they will continue to assess safety issues with the drug.

Aortic dissection happens when there is a tear in the inner layer of the aorta, the largest artery of the body. The aorta carries oxygen-rich blood from the heart throughout the body. When this tear reaches the outer layer, it can be potentially fatal. Meanwhile, aortic aneurysm happens when an aortic wall weakens and bulges due to overstretching of the layers. An aneurysm can burst at any time, leading to life-threatening internal bleeding. It usually develops without any symptoms and is difficult to detect.

Injuries from Cipro, Levaquin, and Avelox

Researchers from the University of Massachusetts and Albany Medical College also investigated the relationship of fluoroquinolones and aortic anomalies by doing a review and meta-analysis from Medline, Embase, and Scopus from inception to February 2017. After reviewing 714 citations, evidence from these studies suggests that exposure to these drugs are associated with a significantly increased risk of aortic dissection and aortic aneurysm.

In addition, a study in 2015 from Taiwan examined the link between fluoroquinolone therapy and the risk of developing aortic aneurysm and dissection. An analysis of 1477 patients was observed with data from Taiwan’s National Health Insurance Research Database (NHIRD) from January 2000 through December 2011. aneurysm was noted in 850 patients, while 662 patients had dissection, and 35 patients were diagnosed with both.

Pharmaceutical companies Bayer, Merck & Co., and Johnson & Johnson are facing numerous lawsuits from patients and family members who suffered from the complications of Cipro, Levaquin and Avelox. The lawsuits claim that these manufacturers failed to warn the public about the risk of the antibiotic drugs, specifically about aortic dissection and aneurysm, and that the company continued to market them as first-line antibiotics when Cipro, Levaquin and Avelox should have been used only after other alternatives were not effective. 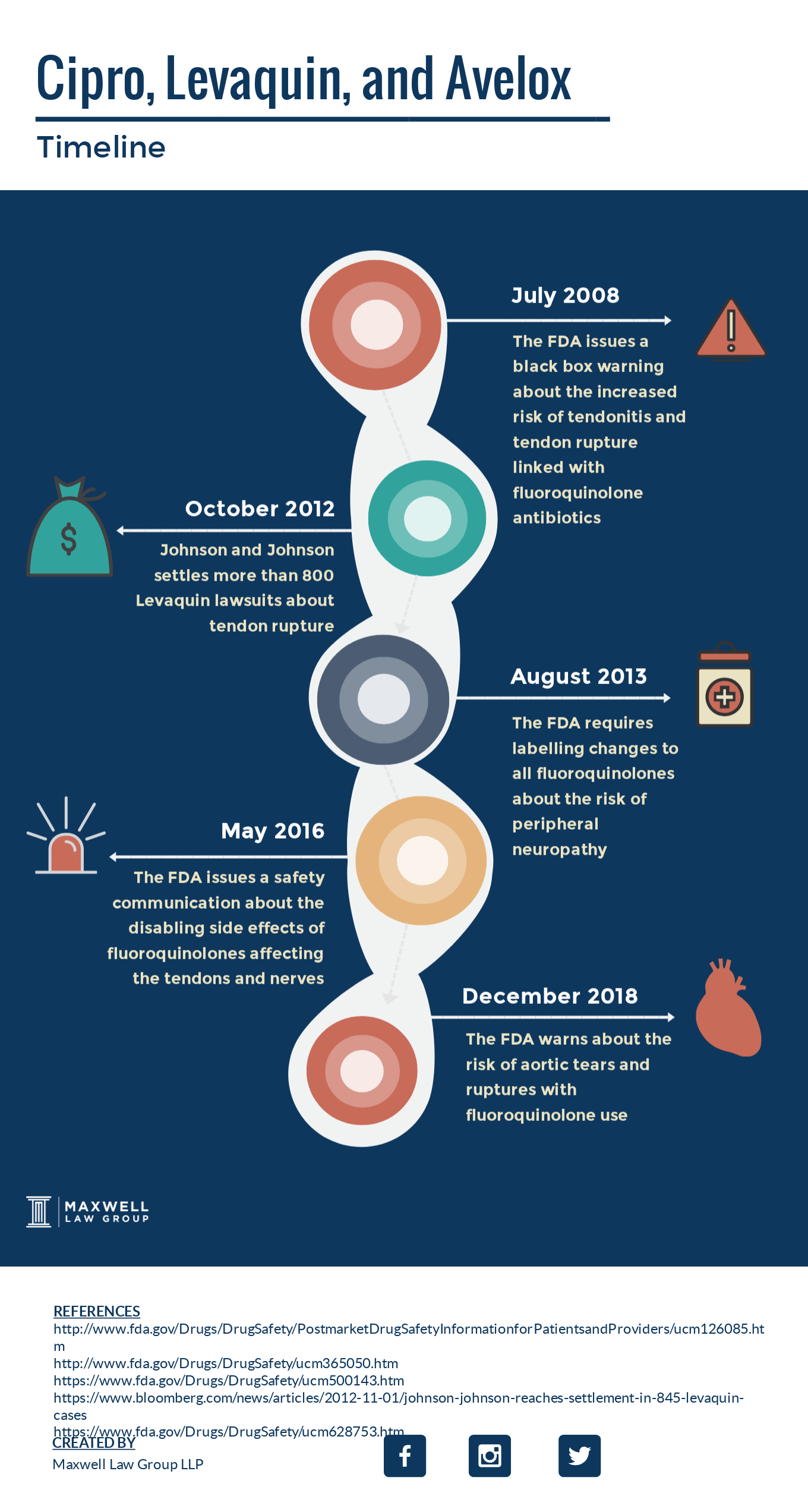 If you or your loved one suffered from aortic dissection and other aortic issues from taking Cipro, Levaquin, or Avelox, Maxwell Law Group can help get you the compensation you deserve. Call (844) 525-7155 or fill out the form below and we’ll investigate your case at no charge to you.