Patients who have developed gastrointestinal problems after taking Benicar may be eligible to pursue a claim and seek financial compensation.

Benicar is an antihypertensive medication used to manage high blood pressure. It belongs to a group of drugs called angiotensin II receptor antagonists. Numerous reports of serious gastrointestinal injuries, some leading to hospitalization and death, prompted the FDA to require a label change containing a warning about this association. As a result, thousands of patients and family members have filed lawsuits against the manufacturer for failing to warn about its dangers and for continuing to promote Benicar as a safe anti-hypertensive drug despite these serious side effects.

If you or a loved one was treated with Benicar and suffered gastrointestinal injuries, contact Maxwell Law Group LLP today. We can answer your questions and review your case for free.

How Does Benicar Work?

Benicar (generic name: olmesartan medoxomil) is an oral medication used to lower blood pressure, prevent blood vessels from narrowing, and improve overall blood flow. It is prescribed to patients with hypertension and may be given with other blood pressure maintenance drugs. Similar to valsartan, Benicar belongs to a group of antihypertensive drugs called angiotensin II receptor blockers (ARBs).

The FDA approved Benicar in 2002 under the Japanese manufacturer Sankyo Pharma. The company merged with Daiichi Pharmaceutical in 2005, creating Daiichi Sankyo. In 2013, it was estimated that the company earned $3.1 billion in sales from Benicar alone. 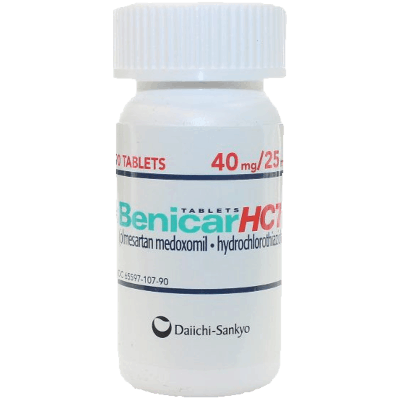 How Does Benicar Work?

Benicar is an ARB that inhibits the angiotensin activity, causing blood vessels to relax and prevents aldosterone secretion. Aldosterone is a hormone which retains water and sodium in the body. By inhibiting these processes, vascular resistance and blood pressure is ultimately decreased.

In 2013, the FDA required label changes to Benicar warning users about the risk of using Benicar. The drug was associated with an increased risk of intestinal problems known as sprue-like enteropathy. Symptoms of the disease include severe, chronic diarrhea with substantial weight loss, and may develop months to years after taking the drug. The FDA recommended that patients who experience these symptoms discontinue Benicar and start therapy with another hypertensive medicine.

All drugs that affect the renin-angiotensin system during pregnancy can cause fetal toxicity. Potential neonatal adverse effects include skeletal malformations, hypotension, renal failure, and death. Discontinuation of Benicar is also advised once pregnancy is detected.

In 2012, Mayo Clinic published a study which looks at the association of severe sprue-like enteropathy with olmesartan (Benicar) use. The report followed 22 patients from 2008 to 2011 taking different doses of olmesartan. Chronic diarrhea and weight-loss were observed, with 14 patients requiring hospitalization. Gastritis was documented in 7 patients, while colitis was noted in 5 participants. Recovery and improvement of gastric status was confirmed in 18 patients who underwent a follow-up biopsy after discontinuation of the drug.

A study in 2013 highlighted the case of a 64-year old male patient with a history of hypertension who experienced worsening diarrhea and weight loss over a three-month period. A small bowel biopsy was taken, which showed blunting and infiltration of the intestinal lining. After performing laboratory tests, the patient was discharged and asked not to take olmesartan. After 2 weeks, the patient had close to normal bowel movements with no other abdominal symptoms. Two months later, the patient had a complete resolution of his diarrhea symptoms and regained 20 pounds.

Over 1,500 lawsuits were filed against Daiichi Sankyo on the grounds that the company failed to warn the public about the serious gastrointestinal side effects of Benicar, and continued to market the drug as a safer hypertensive treatment despite growing concerns about its risks.

Benicar lawsuits were consolidated into a multidistrict litigation (MDL 2606) to increase the efficiency of the legal process.

In 2017, Daiichi Sankyo agreed to pay $300 million to settle the lawsuits involving Benicar.

If you or your loved one suffered from gastrointestinal issues from taking Benicar, Maxwell Law Group can help get you the compensation you deserve. Call (844) 525-7155 or fill out the form below and we’ll investigate your case at no charge to you.