Patients who have experienced compulsive behaviors resulting in financial losses and psychological damages after taking Abilify may be eligible to pursue a claim and seek financial compensation.

Abilify is an antipsychotic drug used to treat schizophrenia and manic depression. It has also been used off-label for dementia, autism, insomnia, and eating and mood disorders. After reviewing more than 100 cases, FDA issued a warning that the drug causes compulsive behaviors including gambling, shopping, and uncontrollable eating and sexual urges. As a result, more than 1,600 lawsuits have been filed against Abilify’s manufacturer, Otsuka America Pharmaceutical Inc., alleging that it knew about Abilify’s serious and life-changing side effects and failed to warn the public.

How Does Abilify Work?

Aside from its FDA approved uses, Abilify has been prescribed for dementia-induced psychosis in the elderly, aggression in autism patients, sleeplessness, eating disorders, and mood swings.

Abilify is manufactured by Otsuka America Pharmaceutical Inc. and marketed to the US by Bristol-Myers Squibb. In 2014, it was reported that Abilify became the best-selling drug in the US, with $7 billion in sales annually. 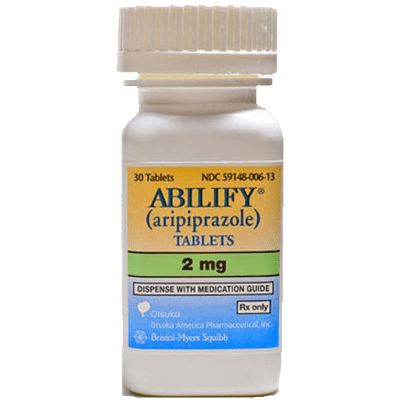 Medication for schizophrenia and manic depression

How Does Abilify Work?

Similar to other atypical antipsychotics, the exact mechanism of action of Abilify is not yet clear. It has been established that it differs from other medications due to its action as an agonist of some dopamine and serotonin receptors, as opposed to purely inhibiting all D2 receptors. It has been theorized that altered dopamine levels in the brain result in schizophrenia.

Abilify’s warnings and precautions include the following:

In 2005, the FDA issued a black box warning about the increased risk of mortality among elderly patients with dementia-related psychosis, and suicidal thoughts and behaviors among children, adolescents, and young adults, which were associated with Abilify use.

Moreover, in 2016, released a safety communication warning about compulsive behaviors related to gambling, binge eating, shopping, and sexual activities with the use of Abilify. These behaviors reportedly stopped upon discontinuation or dose reduction of the drug. The warning came after the agency identified 184 reports associating the drug with impulse-control issues.

A study conducted in 2013 showed that there is a possibility that aripiprazole (Abilify) causes pathological gambling. Data on 8 patients suffering from schizophrenia and bipolar disorder who were taking Abilify were analyzed. All of them had a history of addictive disorders and gambled regularly prior to being given a prescription of the drug. The study showed causaulity between Ability and problematic gambling in 7 of the patients, which the results were inconclusive for the final patient.

Another study published in 2014 in the Journal of the American Medical Association concluded that dopamine receptor agonists—including aripiprazole (Abilify)—were associated with impulse-control disorders. The study analyzed over 2.7 million drug events from 2003 to 2012, and identified 1,580 incidences related to impulse control disorders, specifically pathological gambling, hypersexuality, and compulsive shopping. Pathological gambling was mentioned in 628 (39.7%) of the reports.

In addition, a study from 2017 published in the Journal of Clinical Psychopharmacology confirmed the link between impulse control and gambling disorders and aripiprazole, among other drugs. An analysis of 355 gambling disorder cases and 4,341 cases of impulse-control disorder was conducted. Aripiprazole users showed the highest risk ratio for gambling and impulse-control disorders compared to pramipexole and ropinirole (although those two drugs also showed an elevated risk of these behaviors).

Currently, there are more than 2,300 pending lawsuits against Otsuka America Pharmaceutical, Inc. and Bristol-Myers Squibb on the grounds that these companies knew about the increased risk of compulsive and addictive behavior from using Abilify and failed to warn the public about these risks. Label changes about this risk were added in Europe back in 2012 and in Canada in 2015.

Bristol-Myers Squibb had paid settlements in the past: in 2007, the company paid a total of $515 million following a federal investigation where the company made payments to health care providers for prescribing Abilify for off-label uses; similar arrangements were made for pharmacies that filled the prescriptions.

Another settlement occurred in 2016 in the amount of $19.5 million for illegal marketing practices. The company continued to market the drug to elderly patients with dementia despite the FDA releasing a report that mortality is increased when these individuals use the medication. The company also promoted Abilify among children without any approval that it is indeed safe and effective for pediatric patients afflicted with psychological disorders.

In October 2016, pending cases were consolidated into multidistrict litigation (MDL) filed in the US District Court Northern District Florida. Patients who suffered from compulsive behaviors and their families affected by the drug’s serious risks are seeking damages for financial losses, medical expenses, and other psychological issues.

On February 15, 2019, Bristol-Myers Squibb and Otsuka America Pharmaceutical announced a global settlement for all claims filed up to January 28, 2019.